On Sept. 11, 2007, the Global War on Terrorism entered its sixth year. As of February 2007, more than 1.5 million U.S. warriors had been deployed to the combat zone. According to the American Psychological Association Presidential Task Force on Military Deployment, more than 500,000 warriors have served two combat tours, and 70,000 have served three or more tours. At the present time, there are more than 154,000 U.S. troops in Kuwait and Iraq, 26,000 troops in Afghanistan, 1,500 troops in Kosovo, 1,700 troops in the Horn of Africa and 600 troops in the Sinai.

The high operational tempo and frequent and multiple deployments required to fight the Global War on Terrorism have placed unprecedented levels of stress on this nation’s warriors and their families. As of February 2007, 700,000 U.S. children had a least one parent deployed to a combat zone. According to recent reports, one out of every five troops returning from combat deployments reported 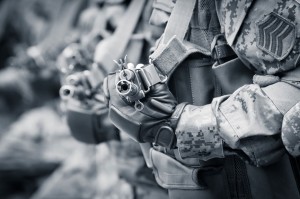 some type of behavioral health problem such as anxiety, depression, marital problems, post-traumatic stress disorder or traumatic brain injury. There is a critical need for professional counselors and other mental health professionals to provide services to these warriors and their families.

To provide competent care to returning warriors, mental health professionals should have appropriate training, personal qualities and specialized counseling skills. To be most helpful to military clients, counselors should apply the multicultural counseling competencies developed by members of the Association for Multicultural Counseling and Development and endorsed by the American Counseling Association. By viewing the military as a distinct culture and developing interventions based on the recommendations contained in the multicultural standards, counselors can increase their ability to help their military clients.

Because the U.S. military is a highly diverse organization composed of members of various races, ethnic groups, religions and cultures, not all counseling professionals agree that it constitutes a unique culture. But although there is cultural, religious and ethnic diversity within the military, the military is a culture in its own right. When warriors are asked about their ethnicity, it is not uncommon to hear the response “We are all green” from members of the Army and Marine Corps or “We are all blue” from those in the Navy, Air Force and Coast Guard. These service members have chosen to acculturate to the military, but they do not relinquish their individual ethnic, cultural and gender identities. Each has voluntarily elected to be part of a culture of warriors charged with defending the freedoms of citizens of the United States.

The military culture is further identified by three key documents. All military service members swear to support and defend the Constitution of the United States against all enemies, both foreign and domestic, when they take the oath of office. They learn what is required of them in combat by adhering to the Military Code of Conduct and abide by a unique set of laws and regulations defined in the Uniform Code of Military Justice. Because the military is a unique culture, its members are best served by counselors who are prepared to employ multicultural counseling competencies.

The counselor, based on his or her own life experiences, family roles, culture and ethnicity, brings assumptions, values and biases about the military to the counseling session. Counselors who have not had frequent contact with military personnel may hold perceptions and biases about the military culture and its members that hinder development of an effective counseling relationship. The effective counselor should be actively involved in the process of becoming aware of his or her assumptions about human behavior, values, biases and preconceived notions as they relate to military service and military clients.

Ability to understand and join the client’s worldview

The worldview of the military client is based on the individual’s cultural experiences before entering the military, coupled with the enculturation process that takes place in basic and advanced military training. The military client’s worldview is defined as the way he or she views self, social relationships, human nature and political, educational and economic positions. These views are shared by others in the military culture.

To join with the worldview of military clients, counselors need to recognize several common values shared by military personnel, including:

The stigma associated with mental health treatment in the military, especially in the Marine Corps and the Army, is real. Despite efforts by senior military leaders to remove the stigma, the military cultural norm of not wanting to appear weak and vulnerable to fellow warriors persists. This prevents many warriors from seeking counseling services, especially those offered on the military installation, where confidentiality may not be guaranteed. This reality provides an opportunity for civilian counselors to be the mental health care providers of choice for warriors who want discrete and confidential services that will not be reported back to the military unit.

Military clients do not assume that counselors’ attitudes, beliefs and values will be similar to their own. In fact, many warriors stereotype civilian counselors as holding liberal personal and political values and being opposed to military efforts in the war on terrorism. Moreover, many warriors believe counselors will make negative judgments about military service. Counselors should keep these client concerns in mind as the counseling relationship is initiated. If the counselor can communicate unconditional positive regard for the military client, the probability of the counseling being successful is enhanced.

Skills to meet the needs of military clients

In addition, the military culture has a language of its own. The effective counselor will take the time to learn as much about the language of the military as possible. When clarification is needed, the counselor should be comfortable asking the client to explain a term or acronym. This technique empowers the client, strengthens the therapeutic relationship and adds to the counselor’s knowledge base of military culture.

Effective counselors have skills in consultation and are open to seeking assistance (with client permission) from experts with specific knowledge about a client concern. The counselor uses the knowledge gained from the consultation to enhance the effectiveness of the counseling session. Additionally, effective counselors are able to employ assessment instruments and are aware of cultural influences that may impact the test results. For example, military personnel applying for special assignments are required to complete a battery of psychological assessments. In the zero-defect world of the military culture, warriors are less likely to admit weaknesses and vulnerabilities that most people in the civilian culture would likely acknowledge. Counselors must be aware of this tendency to underreport weaknesses and vulnerabilities when interpreting test results.

There is a significant demand for well-qualified, multiculturally competent counselors to provide services to military personnel. The demand will only grow as the war on terrorism continues. Professional counselors will be successful in working with military clients if they have an understanding of the military culture and utilize the three major multicultural competencies identified by AMCD and endorsed by ACA.

David L. Fenell is a professor in the University of Colorado at Colorado Springs Department of Counseling and Human Services and a colonel (retired) in the U.S. Army Medical Service Corps Reserve. He chairs the ACA Special Committee on Military and Veteran Affairs. Contact him at dfenell@uccs.edu.