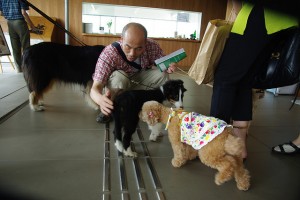 In its August issue, Counseling Today delves into the merits of animal-assisted therapy and how a four-legged colleague can help break down barriers with counselors’ toughest clients. But new studies reveal that pet ownership provides similar emotional and social support for people who aren’t necessarily facing physical or mental health challenges.

Psychologists at the University of Miami and Saint Louis University conducted three different studies that explored the benefits of pet ownership for what they termed “everyday people,” or people who owned pets for a nontheraputic use.

In this study, 217 people (79 percent women, mean age 31, mean annual family income $77,000) answered surveys aimed at determining whether pet owners in the group differed from people who didn’t have pets in the areas of well-being, personality type and attachment style. Several differences between the groups emerged, and in all cases, pet owners were happier, healthier and better adjusted than were non-owners.

A second experiment, involving 56 dog owners (91 percent of whom were women, with a mean age of 42 and average annual family income of $65,000), examined whether pet owners benefit more when their pet is perceived to fulfill their social needs… This study found greater well-being among owners whose dogs increased their feelings of belonging, self-esteem and meaningful existence.

The last study, comprising 97 undergraduates with an average age of 19, found that pets can make people feel better after experiencing rejection. Subjects were asked to write about a time when they felt excluded. Then they were asked to write about their favorite pet, or to write about their favorite friend, or to draw a map of their campus. The researchers found that writing about pets was just as effective as writing about a friend when it came to staving off feelings of rejection.

Overall, said lead researcher Allen R. McConnell, PhD, of Miami University in Ohio, pet owners had a better overall well-being than persons who did not own a pet.

The study also found that pet owners remain equally close with their human companions, indicating that animal ownership does not hinder relationships.