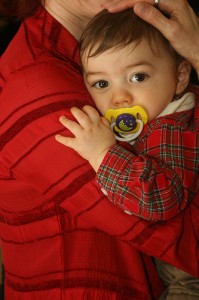 Previous studies have already suggested that an expectant mother’s mental health can affect her child’s physical and emotional well-being. But University of Montreal researchers found that mothers who are depressed can have an impact on their children outside the womb as well.

In a study recently published in the Proceedings of the National Academy of Sciences, researchers found that the brains of children with mothers who had symptoms of depression throughout their lives developed differently. The amygdala, a portion of the brain linked to processing emotional reactions, was found to be larger in children of depressed mothers. The researchers found the same changes — but on a greater scale — in the brains of adopted children who were initially raised in orphanages. However, children adopted earlier in life and brought into affluent families did not exhibit an enlarged amygdala.

“This strongly suggests that the brain may be highly responsive to the environment during early development and confirms the importance of early intervention to help children facing adversity,” said researcher Sonia Lupien in a University of Montreal release. “Initiatives such as prenatal and infancy nurse home visits and enriched day care environments could mitigate the effects of parental care on the developing brain.”

Although the study didn’t prove why the amygdala became enlarged in these children, research on other mammals has shown that this portion of the brain develops most rapidly shortly after birth.