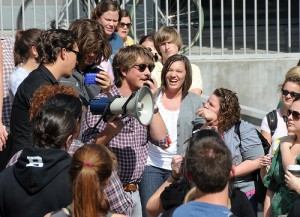 If they believe what they see on TV and in the movies, students headed off to college for the first time might be under the impression that going out and partying is the key to being happy and having fun. But an Indiana University study found that instead, it is actually the positive connections that students make that are the driving forces of their happiness.

The researchers looked at extroverted college students and students who tended to keep more to themselves, and they found that the happiest people were not the ones who were drinking and partying all the time. According to Shyness Research Institute Director Bernardo J. Carducci, the happiest students were the ones who focused more of their time on connections with friends, family and positive thinking — and less time on partying and drinking.

“You don’t have to go out and party to be happy,” Carducci said. “That’s the thing students feel they need to do, particularly when they’re new to campus. But, it’s critical to maintain contacts with family, with friends and like-minded individuals with whom you feel some sort of meaningful connection. That could be other people in clubs that you belong to, like the accounting club, astronomy club . . . people you play intramural sports with.”

Another study conducted found that students who are goal-oriented tend to be happier than those who are less focused.