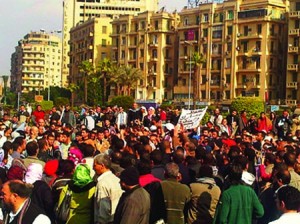 Tahrir Square in downtown Cairo served as the nexus for daily demonstrations. (Photo by Diane Tayeby)

On Jan. 24, I was sitting in the break room of my office in a human rights organization in Cairo, Egypt, where I work as a counselor for African refugees. As the oldest person in the office, I argued that the demonstrations scheduled for the next day would probably be like past demonstrations in Egypt: poorly attended and quickly dispersed. My younger colleagues were quick to disagree.

That day I cofacilitated the first session of a women’s group that would address grief and loss through creative work on cultural genograms. It was a lively session, and we were very encouraged by the feedback we received.

The next day, the White Revolution officially began with a massive demonstration in Tahrir Square in downtown Cairo that began peacefully but quickly became violent. During the next three weeks, those of us who stayed in Egypt — foreigners and Egyptians alike — experienced a veritable roller coaster of emotions. The security apparatus was quickly dismantled, leaving Cairo, a city of 18 million people, without police. Chaos reigned during the three weeks it took for the Egyptian army to finally and firmly establish its dominance. Months later, we continue to have a crime rate 200 percent above normal and no clear understanding of whom we should look to for protection.

During this period, I observed an interesting type of anxiety that I myself experienced and am only beginning to shake off. It has also been rather interesting to see firsthand the ways various populations within Egypt have handled, or rather are still handling, the anxiety. In addition to counseling African refugees, many of whom suffer severe symptoms of post-traumatic stress disorder, I also have a private practice in which I counsel Egyptians and English-speaking expats from different countries. Then, of course, there is my own family’s experience in dealing with the stress of this very unusual uprising.

The demonstrators in Egypt were initially recruited from a Facebook page titled “We Are All Khaled Saeid,” set up in remembrance of a young Egyptian man who allegedly was tortured and beaten to death by State Security. When the Egyptian government blocked Facebook from its Internet service, users turned to Twitter to discuss where to meet up and to give real-time updates about what was happening throughout the country. Even our (now former) U.S. State Department spokesman, P.J. Crowley, used Twitter to communicate widely regarding the events unfolding quickly throughout the region.

Then the Egyptian government began sending text messages to all cell phone users, even though that service was disrupted for any other use. The messages were often cryptic, and for some reason, they always seemed to be sent in the middle of the night. Many of us found the texts somewhat alarming. Once the regime fell, the army began using Twitter and Facebook and also text messaging to announce their communiqués—their Orwellian method of handing down proclamations.

Although the protests lasted for three weeks, the daily pattern that emerged saw most people congregating around midday, events escalating throughout the early evening and most violent outbreaks occurring late at night or into the early hours of the morning. During this period, I found myself going to bed with my iPhone so I could receive Twitter updates and e-mails throughout the night. I felt a desperate need to know what was happening, even as I tried to sleep. Because I was in a different time zone than many of my friends and family members, that meant I was constantly hearing the “beep” that signaled the arrival of a new text message, e-mail or Twitter alert.

I was not alone. Later, after clients returned to therapy sessions and when I discussed what was happening with friends, I discovered we were all being awakened throughout the night, receiving little squirts of adrenaline with each ping of our handheld devices. When the government turned off our cell phones and Internet access, we substituted live streaming from Al Jazeera and other news organizations. Still, we felt a tremendous ache to have our Internet capabilities back.

For the next several weeks, colleagues, clients and friends all complained of the same symptoms: inability to focus, hypervigilance, irritability and other symptoms connected to anxiety. But what I heard then that I hadn’t heard with past clinical experience was the complaint that all of these people continued to wake up multiple times throughout the night to check their cell phones, to refresh their Twitter pages, to check in on Facebook or, in the case of my refugee clients, to check for SMS messages.

I was reminded of an NPR interview I listened to in 2010 on Fresh Air with Terry Gross. The interview was with Matt Richtel, a journalist who covers technology for The New York Times. He was introducing his “Your Brain on Computers” series, which focused on how multitasking with computers and handheld devices such as BlackBerries and iPhones can cause people to become distracted, alter the way the human brain processes information and lead to other possible brain changes.

During his interview, Richtel talked about a group of scientists who went into the wild for a few days without any of these technological devices. It took them three days for the effects of those devices to wear off — to feel part of their surroundings again and to be less distracted. Their finding was that more study needs to be done.

Meanwhile, I was conducting my own little informal study in Egypt. Recognizing that our family was caught up in this same anxiety-producing cycle, we made the decision to spend long weekends at a beach house on the Red Sea coast, a place where there was no Internet or cable TV. As a group, we also decided to turn off the sound to all message alerts on our handhelds and to answer calls only from family members.

We opened our balcony windows at night, and instead of listening for the alarmist beeps of our cell phones, we listened to the rhythmic in and out of the tide, a naturally soothing sound I will always connect with those healing weekends.

Finding such relief for our own sleeplessness and distractibility made me consider what suggestions I might provide to my clients. Once we resumed sessions for the refugee women’s group, it became immediately and painfully clear that we needed to take a step back from remembrance to safety in our trauma treatment because the women had been retraumatized by the ongoing events in Egypt. We left the conference room table covered with genograms and art supplies to go sit in a circle on the floor, where we practiced progressive muscle relaxation and simple breathing meditation. I also used guided meditation to incorporate the images and sounds of the sea with our rhythmic breathing.

We discussed the difference between spending a lot of time discussing our fears about what might happen and spending time exploring the personal strengths that make us survivors. We talked about the need to use cell phones, TV and other modes of communication to help us stay safe, but we also discussed the danger of using technology to spread rumors and how that action keeps our anxiety elevated.

I introduced mindfulness practice with some clients, stressing the importance of focusing on one task instead of returning to the multitasking we all had engaged in earlier. I printed out the transcripts of the interviews between Gross and Richtel and shared them with clients, all of whom were a little surprised and yet reassured to see that research was being done on this subject. In addition, just being able to say that it seemed to take three whole days without technology to make the symptoms go away had a positive effect for those who gave it a try. Unlike with other addictions, it seems this one will be short-lived, especially among those of us who became aware of how round-the-clock access to technology fed our anxiety levels, creating alarming symptoms in individuals who had not experienced them before.

As I write this, the elections in Egypt are looming, the trials of the main government players are about to be held and protests continue to be organized on a weekly basis. In what has become a new normal climate, my clients have returned to a regular schedule, and we’ve managed to make our way back to the issues we were exploring pre-revolution. The women’s group, all thoughts of loss and grief and heightened anxiety tossed aside for just a moment, spent their most recent session sharing nail polish and looking over courses offered in the community on topics including English and handcraft. A section of our office is arranging a self-defense course that will empower these women to feel a bit less afraid in this uncertain environment. We’re all practicing breathing a little deeper, being mindful and living in the moment.

I am typing this document on my laptop offline to avoid being distracted by incoming e-mail. I now put my cell phone to sleep at night before I go to bed. I watch the news only once in the morning and once in the evening, finding time in between to catch a couple of cooking shows. I will be closely following future research related to technology multitasking.

Diane Tayeby is an ACA member who practices counseling psychotherapy in Cairo, Egypt, both in private practice and with a human rights organization. Contact her at dianetayeby@aol.com.

Letters to the editor:
ct@counseling.org