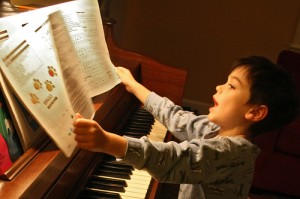 Looking to increase your child’s verbal intelligence? Music-based training may hold the answer, according to a study done at The Royal Conservatory in Toronto.

As the Toronto Sun reports, 48 children between the ages of 4 and 6 took part in computer-based, cognitive training programs and then separated into two groups. One group received music-based training, and the other received visual arts training:

“The children were then tested for their verbal IQ, which included looking at their ability to recall words, analyze information and solve problems using language. When the children were retested five to 20 days after the end of the lessons, those who had the visual arts training didn’t have a significant increase in verbal intelligence. But for those who had the music-based training, 90% had intelligence improvements five times greater than the other group.”

Says study collaborator Ellen Bialystok of the findings, “These results are dramatic not only because they clearly connect cognitive improvement to musical training, but also because the improvements in language and attention are found in completely different domains than the one used for training. This has enormous implications for development and education.”