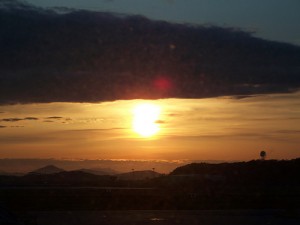 Having recently celebrated nine years of sobriety, I’ve been reflecting on my early days in this journey.  Although I went to treatment for alcoholism three times in a seven-month period it was only the third time that I went by choice.  The first time I went was at the behest of my family along with a Baker Act.  As you might imagine, I wasn’t excited about being in treatment and giving up alcohol.  Consequently, I did my twenty-eight days and stayed sober exactly five days.  I then began drinking outside AA meetings and going into them under the influence.

Soon after that my wife went to court to have me committed under Florida’s Marchman Act.  A judge signed off that I was a danger to society and myself, and off I went to treatment again.  This time I was even less excited about investing a month of my life into doing something I didn’t want to do.  I decided that since I was a grown man nobody was going to tell me when I could or couldn’t drink.  In my sick mind I had not hurt anyone so why should I have to stop?  Treatment was uneventful and I drank on the 28th day on my way home from treatment.  Imagine my surprise when I got home and found my house completely empty, except for an easy chair and a television.  Believe it or not, I thought I had won the lottery.  Now I could drink with impunity.  No wife or kid around to stop me.  That lasted about six weeks.

During those six weeks the only thing I ate was one bag of M & Ms per day that my wife brought me.  She hadn’t completely given up on me though, she just couldn’t live with me like that.  In any case, during those six weeks I lost sixty-five pounds.  Then one day she came over and out of the blue I said to her “I’m done, I want to stop drinking”.  What I didn’t know then was that I suddenly had something that I never had before, a desire to stop drinking.  Alcoholics Anonymous says that the only requirement for membership is a desire to stop drinking.  I finally qualified.  I said to my wife, “I’m going to go to treatment and do everything they tell me to do”.  I opened the phone book and found an alcohol and drug treatment facility in Delray Beach.  That decision changed my life in more ways than I can count.  It literally saved me from a painful, premature death.

My start in treatment was inauspicious, at best.  On the appointed day of my intake my wife drove me there at about 8:30 in the morning.  I had been drinking until 4 AM.  The owner did not want me to stay because he thought I needed detox.  My wife begged him to let me stay and capped her pleading and crying with “we need a miracle”.  That’s what treatment became for me, a miracle.

Like many treatment facilities, this one uses a twelve-step model to help patients get and stay sober.  But they did much more than that for me.  Alcoholics Anonymous tells us that drinking is but a symptom of underlying issues that are going on.  Treatment, for me, focused on that over a twenty-eight day program.  However, how they did it was so unique.  First, this particular treatment center only sixteen beds so they never have more than sixteen patients.  For these sixteen patients they have five licensed therapists.  I doubt you’ll find that kind of ratio anywhere else in the country.  They also have a full and a part time chef.  Like most other new patients I showed up undernourished and with terrible (or no) eating habits.  In fact, I was so undernourished that all my toenails had fallen out.  The great food the chefs cooked took care of that.  But besides the food and the therapists it was what I was taught that really helped me when I got out.

I was taught that I was feeling a lot of guilt and shame for what my life had become and how I had squandered a family and my own potential.  I learned that there is a grieving process to quitting drinking and that I had to now feel things that in the past I would always drown with vodka.  I had to learn how to live my life one day at a time without a drink.  But I believe the reason I am sober today is that I learned “Toothbrush Therapy”.

Toothbrush Therapy is a method taught at this particular treatment center which gives one a daily routine that helps a recovering alcoholic or drug addict stay sober.  I can still remember one of the therapists saying “if you follow the simple directions and do these five things every day I guarantee you, you will never drink again”.  The first time I heard that I was beside myself.  You’ve got to be kidding, I thought.  In fact, it was early in treatment that I heard it the first time and like a good alcoholic I was going to prove the professional wrong.  Well guess what, not only was I wrong, I’ve been doing it now for over nine years and I haven’t had a drink yet.

Toothbrush Therapy is named because it is designed in a way that it is used as you would brushing your teeth.  You get in a routine for personal grooming and such and Toothbrush Therapy establishes a routine.  It takes into account that alcoholics and drug addicts are creatures of habit, usually bad ones.  But if we really want to be sober Toothbrush Therapy makes it pretty simple.  You just have to do it every day.  Does that seem like a lot?  Well, I drank every day from the moment I woke up until I passed out.  I was either buying alcohol or consuming it every waking hour.  Toothbrush Therapy can be done in as little as one hour and forty-five minutes per day.  Now, if you really want to stay sober that seems like a very small requirement to me.  If you can’t invest that much time in your sobriety and saving your life then you really don’t want to be sober.  I decided to condense Toothbrush Therapy to one sheet that I could refer to all the time.  This made it even simpler.  In short, I pray at the beginning and end of each day.  I also meditate every day.  I follow that up with reading four pages of AA, or other recovery literature.  Then I go to a meeting every day.  I also have a support group of recovering people who I talk to every day.  Finally, at the end of every day I write a gratitude list in the manner of a letter to God (my higher power).  In the letter I thank him for five things in my life for which I am grateful.  That’s the end of Toothbrush Therapy for that day.  As the therapist told me, “follow the simple directions” and it works.

To complete this circle, I ultimately went back to school because I became passionate about helping other alcoholics and addicts.  After four years I received dual Master’s degrees specializing in Mental Health and Rehab Counseling.  I was able to do my Internship at the place where I got sober, and today I’m a counselor/therapist there.  Finally, a year and a half ago I began a doctorate program that has led me to an even deeper understanding of the underlying problems of alcoholics and drug addicts.  With all that’s happened in my life I still keep sobriety as my number one priority, and in order to succeed at that I continue to do Toothbrush Therapy every day.