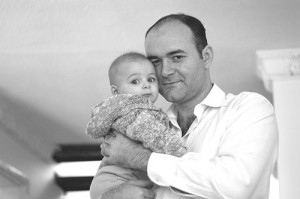 It’s been said that parenthood can change a person, but can it also help you give up your vices and become a better, law-abiding citizen? A newly released study from Oregon State University suggests that for fathers, this might just be the case.

Researchers tracked males living in areas with a high juvenile delinquency rate and higher instances of drinking, smoking and being involved in criminal actions. According to The Los Angeles Times, half of the young men in the study had used alcohol by age 12, and 70 (percent?) had been arrested at least once during the study period.

The study found that the rates at which the men drank and smoked decreased as they got older, but once they had children, they took a nosedive.

“You can’t easily turn your back on a criminal lifestyle or drinking and smoking,” said lead author David Kerr. But having a child, Kerr said, was an incentive for these men to clean up their acts.

The research revealed that the age at which fatherhood comes does matter though, as those who had children in their late teens or early 20s did not reform as much as those who waited until later in life.