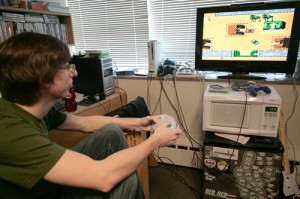 Whether playing violent video games can have an impact on adolescents has been a point of contention since the first game console hit the scene. But a newly published study by the Radiological Society of North America suggests that even one week of play can impact brain function, particularly regarding emotion and aggressive behavior.

The researchers performed functional magnetic resonance imaging (fMRI) analyses on 22 males between the ages of 18 and 29 who had rarely played violent video games in the past. Researchers also conducted an emotional interference task, in which participants had to press buttons according to the color of visually presented words (violent actions were interspersed among nonviolent action words) along with a cognitive inhibition counting task. Half of the men played a shooting video game for 10 hours for one week and then stopped the following week, while the other group did not play any video games during the two weeks.

The participants received another fMRI after the two weeks, and the results revealed that that after one week of playing a video game with violence in it, these men showed “less activation in the left inferior frontal lobe during the emotional task and less activation in the anterior cingulate cortex during the counting task, compared to their baseline results and the results of the control group after one week. After the second week without game play, the changes to the executive regions of the brain were diminished.”

According to researcher Yang Wang, “For the first time, we have found that a sample of randomly assigned young adults showed less activation in certain frontal brain regions following a week of playing violent video games at home. These brain regions are important for controlling emotion and aggressive behavior. These findings indicate that violent video game play has a long-term effect on brain functioning.”