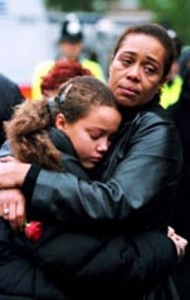 As the American Psychiatric Association (APA) sets out to revise the Diagnostic and Statistical Manual of Mental Disorders, a proposed new definition of depression would characterize grieving as a disorder. As a result, more people would be diagnosed and receive treatment.

But as The New York Times reports, experts are split over the new definition. A report from Columbia and New York universities contends that excluding bereavement — the common step in grief after the loss of a loved one — is more accurate. If bereavement is included, they say in the report, “there is the potential for considerable false-positive diagnosis and unnecessary treatment of grief-stricken persons.”

However, supporters believe that the new definition will allow grieving people to get the help they need.

“Depression can and does occur in the wake of bereavement, it can be severe and debilitating, and calling it by any other name is doing a disservice to people who may require more careful attention,” said Sidney Zisook to The Times.

The APA is also currently reviewing a new definition of autism for the fifth edition of the Diagnostic and Statistical Manual of Mental Disorders. According to an analysis, the proposed definition would not only severely decrease the rate at which the disorder is diagnosed but would also make it much harder for autism spectrum disorder patients to receive the health, social and educational services currently provided to them.