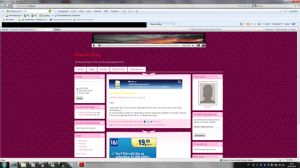 Despite the dark side of the Internet, where instances of cyber bullying among teens have been well documented, new research from the University of Haifa in Israel found that spending time online is not always mentally and emotionally hazardous for adolescents. The study found that when teens blog their feelings, it can actually help them overcome feelings of anxiety and low-self esteem, and help them connect better with friends.

“Research has shown that writing a personal diary and other forms of expressive writing are a great way to release emotional distress and just feel better,” said lead author Meyran Boniel-Nissim. “Teens are online anyway, so blogging enables free expression and easy communication with others.”

The study consisted of 161 students who were chosen because, based on survey responses, they showed levels of anxiety or distress, had trouble making friends or had trouble relating to the friends they had. Four groups were told to write an online blog: two of those groups were told to focus their blogs on social problems and the other two were able to write about whatever they wanted. One group that was able to write about whatever it wanted and one group that was told to write about social problems had comments enabled on their blogs. The control group consisted of students who wrote in a private diary about their social problems or did nothing at all.

The researchers found that “maintaining a blog had a stronger positive effect on troubled students’ well-being than merely expressing their social anxieties and concerns in a private diary,” and when the students opened up in the comments section, “comments from the online community intensified those effects. … Self-esteem, social anxiety, emotional distress and the number of positive social behaviors improved significantly for the bloggers when compared to the teens who did nothing and those who wrote private diaries. Bloggers who were instructed to write specifically about their difficulties and whose blogs were open to comments improved the most.” And, when the researchers followed up with the students two months later, these results were still consistent.

“Although cyberbullying and online abuse are extensive and broad, we noted that almost all responses to our participants’ blog messages were supportive and positive in nature,” said study co-author Azy Barak. “We weren’t surprised, as we frequently see positive social expressions online in terms of generosity, support and advice.”