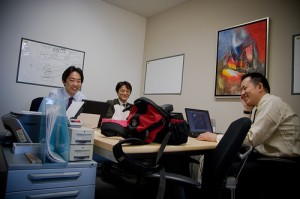 Literally working outside the box enables employees to think outside the box, according to a study conducted by Chinese and American scientists. The researchers found that cramped, claustrophobic office environments stifled creativity and led to less “aha” moments from employees.

As The Telegraph reports, the researchers placed one group of participants inside a cardboard box measuring 5 feet by 5 feet and another group outside of the box in “an airier, less constricted environment.” They were then given tasks to complete that measured their creativity, including putting back together two halves of cut-up drink coasters. The researchers chose this exercise because it was a physical representation of the metaphor “putting two and two together.”

The study revealed that “people who put the coasters together after being reminded of the metaphor were more successful at the task” as well as the fact that “walking freely helped people generate more ideas than when they were made to walk in a straight line.”

According to researcher Angela Leung, “All this suggests that there’s something to the metaphors we use to talk about creativity. Having a leisurely walk outdoors or freely pacing around may help us break our mindset. We should also consider getting away from small office cubicles and creating open office spaces to free up our minds.”