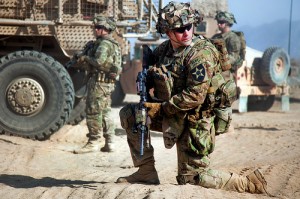 As the number of veterans seeking mental health care continues to rise, the East Wing has decided to step in. First lady Michelle Obama is announcing a partnership aimed at helping veterans prevent and cope with mental health problems that have developed during their time of service, including posttraumatic stress disorder (PTSD) and traumatic brain injuries (TBI).

The partnership will unite the first lady’s national initiative, Joining Forces (which she leads with Dr. Jill Biden), with more than 100 medical schools and medical trade groups such as the Association of American Medical Colleges and the American Association of Colleges of Osteopathic Medicine. As part of the partnership, The Huffington Post reports, “the schools are agreeing to step up training for medical students in how to treat PTSD and traumatic brain injury, increase research into the conditions and share new information and best practices.”

Obama is announcing the partnership at Virginia Commonwealth University and, according to aides, is focusing her speech on the difficulty veterans can have during the transition from combat life to home life and the importance of tackling these mental health issues with the support of fellow Americans.

The partnership will include 105 medical colleges and 25 osteopathy colleges, which, Campus Progress reports, accounts for roughly 75 percent of all medical students:

“While some medical school curriculums have PTSD and TBI training embedded into their programs, many do not. Through the initiative, medical students will have access to more training and be more engaged around mental health issues and trauma affecting American veterans.”

According to the Department of Veterans Affairs, 10 to 18 percent of Iraq and Afghanistan war veterans may have PTSD, and approximately half of America’s veterans seek care for PTSD or TBI upon returning home.