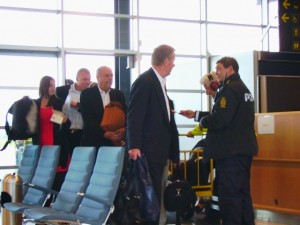 In light of the economic downturn, it has become more common in recent years for people to take on extra shifts and work more hours as a way to make more money and make ends meet. But a study in the journal PloS One revealed that more hours spent working can also lead to more instances of depression.

As NPR reports, the researchers tracked the health of white-collar, civil service workers living in Great Britain and found that those who worked 11 hours a day or more had more than double the risk of major depression compared with those who put in a standard, eight-hour workday.

“Despite the fact that many of the employees who worked long hours were high [socio-economic status] employees,” study leader Marianna Virtanen said, “working long hours was associated with depression.”

Those working the longer hours, the study found, were more likely to be men in “higher-level job grades” who were either married or living with someone and who typically consumed more alcohol than they should.

According to the researchers: “In terms of prevention, revealing the relevance of long working hours as a risk factor among high [socio-economic status] employees who otherwise have lower risk of depression seems important.”