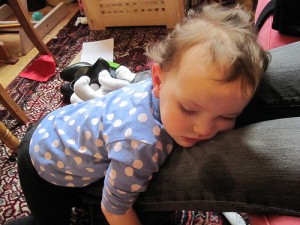 If your toddler misses a nap, you might think the only risk you’re putting him or her at is a few hours of being cranky. But according to a University of Colorado at Boulder study, depriving toddlers of naps could be more detrimental than previously thought.

The study revealed that toddlers between the ages of 2.5 and 3 who miss even just one daily nap show more anxiety, less joy and interest, and a poorer understanding of how to solve problems, said study leader Monique LeBourgeois.

“Confusion is not bad — it’s a complex emotion showing a child knows something does not add up,” LeBourgeois said. “When well-slept toddlers experience confusion, they are more likely to elicit help from others, which is a positive, adaptive response indicating they are cognitively engaged with their world. … Just like good nutrition, adequate sleep is a basic need that gives children the best chance of getting what is most important from the people and things they experience each day.”

Source: University of Colorado at Boulder