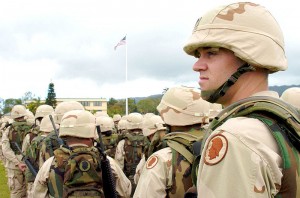 Although suicides among members of the National Guard and Army Reserve have decreased since last year, recent government studies have found these service members still have higher rates of mental health problems and mental health-related illnesses than active duty troops. And as The Washington Post reports, efforts by Congress, the U.S. military and private contractors to address these issues have been “uncoordinated and often ineffective.”

In a report by the Armed Forces Health Surveillance Center, which tracked postdeployment health reassessment screenings from September 2010 to August 2011, returning reservists were 55 percent more likely than active duty service members to have a mental health issue serious enough to require a follow-up checkup. Approximately 17 of every 100 returning required such a checkup.

“The National Guard faces unique challenges compared to our active duty counterparts,” said Gen. Craig R. McKinley, chief of the National Guard Bureau, at a public forum this past November.

Experts say reservists do not have the same access as active duty service members do to services and networks needed to treat conditions such as posttraumatic stress disorder or traumatic brain injuries.

“A National Guard soldier . . . has anywhere from 10 to 14 days of demobilization training and processing, and then we throw them back into their community to work with folks who are part of the 99 percent who never fought,” said Former Army Vice Chief of Staff Gen. Peter Chiarelli.

He added that efforts are under way to provide better mental health care for the reservists, who represent an “integral part of the nation’s operational fighting force.”

Read the rest of The Washington Post article here