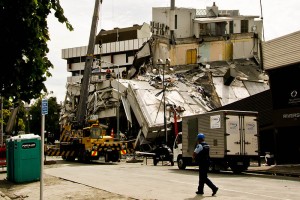 Along with having a long-term impact on survivors’ mental health, new research reveals that natural disasters can also affect a person’s cognitive performance.

Earlier studies indicated a higher occurrence of traffic accidents and accident-related fatalities after “human-made disasters” such as the September 11, 2001, terrorist attacks because of increased cognitive impairment, which can lead to increased stress levels as well as intrusive thoughts. But no studies had been conducted involving natural disasters and their effect on cognitive performance until the 2010 earthquake in Christchurch, New Zealand, when William S. Helton and James Head, who were originally conducting a study on human performance, switched their focus in the aftermath of the natural disaster.

“The researchers measured participants’ cognitive control by asking them to either press a button corresponding to numbers presented on a video screen or to withhold a response to a preselected number presented on the same screen. Normally, participant performance would improve during the second session, but the authors found an increase in errors of omission following the earthquake. Helton and Head also noted distinct differences in pre- and post-earthquake findings depending on self-reported responses to the disaster: If the participants reported being anxious following the quake, their response times sped up and they made more errors of commission, whereas those who reported depression logged slower response times.”

Says Helton, “The article provides evidence for a phenomenon many people report experiencing after a major event like an earthquake. People would find themselves zoning out and making more errors than usual after the quake.”

While more research on the subject is needed, the study’s findings may point to potentially serious complications arising in daily life and work tasks after a natural disaster, and could also impede police, emergency responders, and others working in the aftermath of the disaster from successfully completing tasks related to disasters.

“Presumably people are under increased cognitive load after a major disaster,” Helton said. “Processing a disaster during tasks is perhaps similar to dual-tasking, like driving and having a cell phone conversation at the same time, and this can have consequences.”

Read Counseling Today’s February feature story, “The transformative power of trauma,” which features Lea Flowers, a licensed professional counselor who experienced Hurricane Katrina firsthand, and in the February cover story, learn about the different ways counselors can offer a sense of safety and stabilization to disaster-affected clients even before they make an appointment.