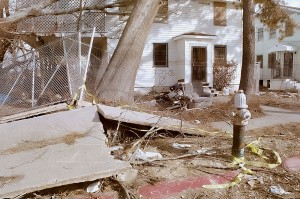 Going through a traumatic experience and dealing with the long-term ramifications of a disorder like Posttraumatic Stress Disorder (PTSD) is never something anyone would hope for, but one psychologist says that undergoing trauma can actually turn out to be a positive thing.

As AOL Lifestyle reports, University of Nottingham Professor Stephen Joseph said that working with the survivors of a ferry disaster revealed that the traumatic experience left them with “with a new outlook.” In the beginning, survivors reported what were classic symptoms of PTSD: bad dreams, anxiety and distress. However, three years later Joseph saw a change.

“I noticed many of the survivors also talked about positive changes in their lives,” he said. “The trauma had left them with a new outlook, containing a mix of negative and positive.”

To further delve into this, Joseph and fellow researchers added a new question to the survey: “Has your view of life changed since the disaster — and, if so, has it changed in a positive way or a negative way?”

He then began to explore the positive sides of trauma.

“When I talked to colleagues about this, I was met with blank looks,” Joseph said. “Some argued there is nothing positive about trauma. And there isn’t. But in the struggle to deal with what has happened, positive change can arise. Most of us know we don’t live life as wisely, responsibly, compassionately and maturely as we could. Trauma is like a wake-up call for us to reflect on this.”

Read Counseling Today’s feature story, “The transformative power of trauma,” and learn ways that counselors can help trauma victims feel a sense of stability even before entering a counseling session.