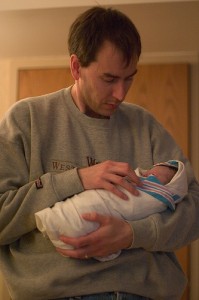 Postnatal depression is typically associated with new mothers, but a recently released study from the Parenting Research Centre in Australia found that the mental health of new fathers is negatively affected just as often by the arrival of a baby.

The study, which included 3471 Australian biological fathers involved in the early stages of childhood, found that one in 10 reported experiencing anxiety, depression and stress in the first year after the birth of their child.

In comparison with Australian men in the general population, fathers in the postnatal period – especially those who were younger and living in more disadvantaged communities – were more likely to report having psychological distress.

“Fatherhood is a great time of excitement and significance” said study co-author Jan Nicholson. “However, the birth of a baby brings enormous changes in parents’ lives. Even for fathers with other children, a new baby results in sleep disruption combined with increased financial demands, domestic burdens, and the need to renegotiate the balance between work, parenting, family roles and responsibilities. It is not surprising then that fathers, like mothers, can find this a challenging time.”

Additionally, postnatal distress seems to put these fathers at risk for mental distress in the future:

“While these problems did not persist beyond the first two years for around half the fathers affected in the postnatal period, the remainder had persistent or recurrent distress when their children were toddlers and preschoolers. By the time children were 4-5 years of age, 30%-60% of those who had previously reported distress, reported distress at this time, compared to just 5% of fathers who had not previously reported any distress.”

Said lead researcher Rebecca Giallo on the findings, “Much important work has gone toward early identification and treatment of maternal adjustment difficulties in the postnatal period. This research suggests that fathers would also benefit from early intervention for any psychological distress during the postnatal period. This is an important step toward ensuring that fathers are linked into appropriate support as they adjust to the changes brought about by a new baby in the family, with potential benefits for well-being of the whole family.”