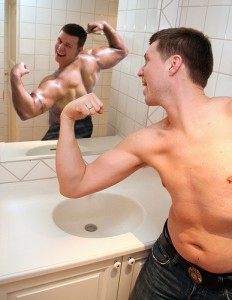 Statistics from the National Association for Anorexia and Associated Disorders reveal that up to 24 million people suffer from an eating disorder in the United States, and an estimated 10 to 15 percent of those cases are men.

Although the number of men with eating disorders is higher now than it’s ever been, writes Rebecca Wagner, the eating disorder coordinator at the Menninger Clinic, in The Atlantic, they are less likely to seek treatment.

And part of the reason, Wagner says, is shame.

“Many men find it particularly difficult to seek help because they feel uncomfortable, embarrassed or ashamed about identifying themselves as having an eating disorder,” Wagner writes. “In a society where men are always expected to be strong, they may feel weak for admitting that they have the disease, which may preclude them from seeking help.”

This idea of strength and toughness can date all the way back to childhood.

“Men, in turn, want to strive to appear more muscular, athletic and attractive,” Wagner writes, citing G.I. Joe action figures as having a potentially negative impact on young boys in the same way Barbie dolls can impact girls. G.I. Joe action figures, she says, can promote “a hyper-muscular physique that is associated with supreme masculinity. Additionally, some men’s sports, such as gymnastics and diving, expect a particular body type.”

“Research shows that these feelings have led many young men to begin using external agents like steroids and over-the-counter supplements to fix an internal problem — body dissatisfaction. These men are also over-exercising and engaging in other maladaptive behaviors to manage their weight, including restricting, binge eating and purging.”