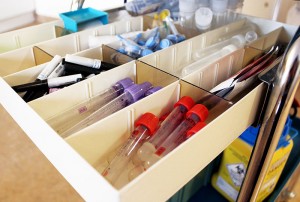 Scientists are hopeful that a blood test examining biological markers for depression could one day help to better diagnose the disorder.

As The Los Angeles Times reports, researchers examined 28 biological markers that circulate in the bloodstream, and found that 11 of them could predict the presence of depression at accuracy levels ranging from medium to large. A preliminary study was done on 14 depressed teens between the ages of 15 and 19 as well as a group of 14 healthy control subjects. It was found that the depressed teenagers had “significantly higher concentrations of the 11 targeted molecules in their blood.”

The researchers hope that by using an objective technique such as a blood test to diagnose depression, some of the stigma involved with the disorder will be reduced and greater numbers of depressed adolescents and adults will come forward for treatment.

“Once you have a measurable index of an illness, it’s very difficult to say, ‘Just pull yourself together,’ or ‘Get over it,’ ” added study leader Eva Redei.