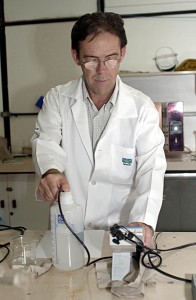 Newly released numbers from the Centers for Disease Control and Prevention indicate that 1 in 88 children has an autism spectrum disorder (ASD). Coming on the heels of that news, the Washington Post reports that scientists and researchers in the field are optimistic that the more than $1 billion spent over the past decade researching the disorder could pay off in the way of new theories and possible drugs.

“I do think over the next three to five years,” Geraldine Dawson, psychologist and chief science officer of the group Autism Speaks told the Post, “we’ll be able to paint a much clearer picture of how genes and environmental factors combine” and cause ASD.

In the way of genetics, the Post reports, researchers have made “dramatic gene mapping, as well as the bioengineering of mice with autism symptoms. Dozens of risk genes have been identified, and a half-dozen drug companies are said to be working on developing new treatments.”

Says Thomas Insel, director of the National Institute of Mental Health, “We’ve made some very significant progress on the genetics end of this search.”

Scientists have also been using mice to test out new drugs:

“Among the most promising is a small, white, strawberry-flavored pill that is so experimental it doesn’t have a name. Developed by a Massachusetts company called Seaside Therapeutics Inc., the drug is aimed at a problem area in the brains of autistic children, where neurons connect and conduct signals through the nervous system. It’s a bit like the way tree-hopping ants might cross the twig ends of one tree branch to another. In Fragile X syndrome, scientists have noted the branches are thinner and the twigs too numerous. The experimental drug thins the twigs and strengthens the branches, allowing a more solid and centralized bridge. The same problem hasn’t been as visible in other types of autism, but many believe the phenomenon is somewhat similar.The drug was deemed successful in mice and is now being tested in children and adults. In small, early studies, the drug made a striking difference in small groups of Fragile X children, causing hermit-like youngsters to start hanging out in the kitchen to chat with their mothers, said Dr. Paul Wang, Seaside’s vice president of clinical development.Now it is being tried in a preliminary study of about 150 children with a range of other autism disorders, including Asperger’s. The results are expected to be presented at a scientific conference in the next year.”