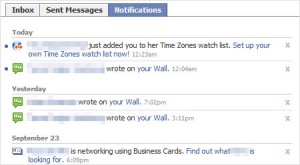 Much has been made of the rise of social media sites such as Facebook, Twitter and Tumblr and their connection to instances of cyberbullying, suicides and low-self esteem in some users. But mental health organizations are beginning to put features in place on these networks in an effort to prevent suicides.

This past December, the National Suicide Prevention Lifeline (NSPL) announced a partnership with Facebook that allows users to click a link next to a user’s post or chat and report it to the Facebook Help Center. The user is then contacted by NSPL, asking the user to set up a one-on-one online chat with one of the center’s counselors or to call its help line. As reported by The Atlantic, NSPL is extending its efforts to other social media sites beyond Facebook:

“Twitter users are also able to report suicidal behavior on the micro-blogging platform. Reporting a tweet via the Twitter support center results in an email being sent to the LifeLine alerting them to the activity on the user’s feed. Currently, Twitter does not release the email address of the user for privacy reasons, a policy the LifeLine hopes they will change their position on. The LifeLine is therefore only able to contact the user via their Twitter account. Tumblr’s help center allows users to report safety concerns in a similar way. Tumblr takes these reports and emails the reported user, encouraging them to call the LifeLine.”

The search engine Google has also adjusted its algorithms so that when, for example, a person types “I want to kill myself” into the search bar, the top hits are suicide prevention sites, and YouTube has also forbidden videos containing “gratuitous violence” or “someone getting hurt” to be uploaded to its website.