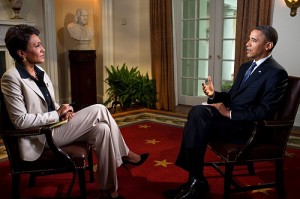 The president told ABC News correspondent Robin Roberts in an interview that he had been going through an “evolution” concerning the issue:

“I’ve stood on the side of broader equality for the LGBT community.  And I had hesitated on gay marriage in part because I thought civil unions would be sufficient. That that was something that would give people hospital visitation rights and other elements that we take for granted. And I was sensitive to the fact that, for a lot of people … the word marriage was something that evokes very powerful traditions, religious beliefs, and so forth. But I have to tell you that over the course of several years, as I talk to friends and family and neighbors. When I think about members of my own staff who are incredibly committed, in monogamous relationships, same-sex relationships, who are raising kids together. When I think about those soldiers or airmen or Marines or sailors who are out there fighting on my behalf and yet, feel constrained, even now that Don’t Ask, Don’t Tell is gone, because they’re not able to commit themselves in a marriage. At a certain point, I’ve just concluded that for me personally, it is important for me to go ahead and affirm that I think same-sex couples should be able to get married.”

CT Online asked some leaders of the Association for Lesbian, Gay, Bisexual and Transgender Issues in Counseling, a division of the American Counseling Association, to share their thoughts on what impact the president’s proclamation might have on the counseling profession and the gay community in the near term.

Initially when I heard President Obama say that he supports same-sex marriage, as a gay man, I felt validated. Maybe validated isn’t the right word. Rather, I felt supported and hopeful. It is probably very difficult for some people to imagine what it really feels like to be surrounded by overt and covert instances of heterosexism. I can only speak for me, but there have been times when it gnawed away at my self-esteem, motivation and sense of self. Whether it is my professional credibility being questioned because my scholarship has focused on LGBTQ counseling issues [or] hearing about kids committing suicide because of their sexual orientations and gender identities, it can be very discouraging and frustrating. So, to hear President Obama, the leader of the U.S., declare, “I think same-sex couples should be able to get married” and “I want everyone treated fairly” made me feel supported and optimistic. This is the first time a president verbalized that he supports equality for LGBTQ people. I think it demonstrates that societal attitudes about queer issues are shifting.

With that being said, my secondary reaction was one of skepticism. I started questioning the sincerity of the statement based on the timing of when it was made. Because he made the statement after [Vice President Joe] Biden’s statement of support and just before the next election, it made me question his authenticity. Is it a political strategy? I think my skepticism just demonstrates the power of repeated exposure to heterosexism in our society. It can cause queer folks like myself to scrutinize the actions of other people.

Overall, I think Obama coming out and saying that he supports same-sex marriage is historic…it is great! Saying that, I now want to see what happens next. As I said, the statement is great, but action needs to happen moving forward including Obama working to pass the Employment Non-Discrimination Act (which would ban workplace discrimination) and supporting a bill to repeal the Defense of Marriage Act. I guess I need to remember that we are on a journey toward social equality for queer people, we are not sprinting toward a finish line.

I believe Obama’s statement has implications for counselors and counselor educators, too. His statement and the national reaction surrounding his statement illustrates that social justice work does not have to involve a major project. His statement brings visibility to injustice experienced by LGBTQ Americans. Obama showed that social justice work can be as simple as speaking out against an injustice and speaking up for oppressed populations. This is something all counselors can do. I look forward to see what changes follow this hopeful statement.

President Obama’s statement regarding same-sex marriage has definitely sparked a lot of attention in the LGBTQ community.  There has been generally a positive response, and there are few in the community who would disagree that, just by [having the] president of the United States [make] a statement in support of same-sex marriage, history has been made. However, I am still [skeptical] of what it means for the LGBTQ community.  Along with his statement of support, President Obama also noted that this was his personal position, and he still believes that it should be up to the states individually to determine their own laws.  For me, this was quite disappointing. I personally believe that with any civil rights issue, if you leave it up to the privileged majority to determine when and where and how rights are to be afforded to an oppressed group, inevitably you are going to deny rights to many.  I believe that a principled person who acknowledges the heart of the issue must also stand by their convictions to make a difference, if they are in a position to do so.

While I believe that this statement certainly moved us forward as a nation in terms of acceptance, it also fails to do what needs to be done on a couple of fronts. First, keeping these decisions at the state level will have a negative impact on many and will serve to further marginalize the most disenfranchised. For example, one could argue that if an individual wants to exercise those rights, that they move to where those rights are available, yet individuals who live in poverty, or those who have physical limitations, face sometimes impossible barriers to moving.

Additionally, it continues to confound the issue for military personnel, who now can serve openly, but without many of the rights and privileges given to their heterosexual counterparts.  Military personnel are usually unable to choose their location and may also be moved around during their service. Gaining access to these rights, therefore, is uniquely complicated.

The second issue I have with where we are in the LGBTQ rights movement is that while same-sex marriage has taken center stage and arguably is an important battle, I cannot help but note that the rights of transgender and genderqueer individuals often fall to the sidelines. With every step forward for same-sex couples, I am aware of the steps not made on important issues of safety and personal dignity for transgender and genderqueer individuals.

In the counseling profession, I believe that President Obama’s statement gives us an opening to exercise our advocacy roles to an ever greater efficacy.  While the spotlight is on these issues, the voices of those who have power — whether educational/professional, class or as heterosexual allies — are needed in order to continue to add the pressure necessary for forward movement. These issues are important to the lives and well-being of same-sex couples and, therefore, they are particularly important for counselors, whose job it is to promote the welfare of the individuals with whom they work.  Additionally, an important consideration for counselors is that anytime the national spotlight is on issues of importance to the LGBTQ community, there is always the chance for greater reactivity by those who would harm us.  Particularly vulnerable are those individuals who are early in their coming out process, as they may feel the spotlight intensely as they navigate places where they feel or don’t feel safe in the world. Additionally, individuals who are more easily read as LGBTQ — typically along the lines of gender expectations or because they are out and open — may be targeted by anti-LGBTQ groups and individuals.  These risk factors need to be understood, and counselors are uniquely positioned to provide additional support in their settings to help offset such backlashes, particularly in settings where homophobia, biphobia, and transphobia are excessively institutionalized.

Ultimately, this issue is incredibly complex, because forward movement always will come with unanticipated consequences. However, in the end, any step forward is one step closer, and these gains are desperately needed by the LGBTQ community, whose rights and safety have been neglected and denied for far too long.

I thought it was a remarkable moment to see a sitting U.S. president come out as a supporter of marriage equality. Barack Obama’s “evolution” on the matter of equality actually shows the shift in attitudes of the greater nation on this topic, as more and more people are noting their support for the LGBTQ community. We see many of the younger generation confused as to why this is even an issue anymore, but I believe as time goes on we will see further systemic change. This change is occurring because of local, state and national efforts on LGBTQ advocacy, including the type of social change being advocated for in the mental health professions from organizations like ALGBTIC.

The impact on the LGBTQ community will be profound and striking overall, but one aspect I want to stress is that the president’s announcement does not necessarily shift policy. The one major policy shift the Obama administration has made is not continuing to defend [the Defense of Marriage Act] in court. At the same time, we have seen government continually have its hand in anti-equality efforts, as has recently been the case in North Carolina. The local and individual level is where I find solace. The young LGBTQ person who is struggling because they are not in a supportive environment can take this as a statement … that even though life may be difficult right now, it can and will get better. That young person now has an ally in our president, which is not something I or many in the community could say growing up.

In regards to the counseling profession as a whole, I think this is a call to action, and for those who are already socially engaged, a welcome outstretched hand as we climb the mountain to equality and advocacy for our clients. I’ve already had conversations with many LGBTQ-identified clients about what the president’s announcement means to them. For us as counselors, being agents of social change is within our purview, and I hope those counselors out there who have not jumped on the fast-moving vessel of social action feel free to do so now. At the ACA level, we have organizations such as ALGBTIC, CSJ (Counselors for Social Justice) and AMCD (Association for Multicultural Counseling and Development) who specifically advocate on local, state and national levels for social change which stabilizes communities and touches our clients each day. As incoming president of ALGBTIC, I am establishing a task force for ally development which will begin to increase the amount of LGBTQ allies in community agencies, schools and administrations through multiple avenues. The time is now for us to make a statement about LGBTQ equality. As we continue to advocate for our profession, remember that the best avenue is advocating for our clients at each level of service, age group and diverse background.

For more information regarding LGBTQ counseling, read Counseling Today’s May 2011 cover story, “’Come and be who you are.’”