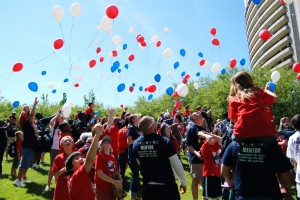 When a military plane on a routine mission from Anchorage, Alaska, to Juneau crashed and killed all eight service members aboard in 1994, Judy Mathewson found herself thinking about the families of the deceased and their need to grieve.

“I knew the children who had lost their fathers that day would need support to help them along … on their grief journey,” says Mathewson, a member of the U.S. Air Force who is also a guidance and vocational counselor.

But Mathewson also noticed there weren’t any mental health support systems readily available for the grieving children. “There were a lot of children connected with those service members, and there was nothing in place for them to help them cope with their grief,” says Mathewson, a member of the American Counseling Association.

In those days, Mathewson recalls, few mental health professionals wanted to discuss the topic of grief with children. “They thought it was bad for them,” she says.

Despite the obstacles, Mathewson and other Alaska-based military families affected by the plane crash founded the Tragedy Assistance Program for Survivors (TAPS). Out of that program grew the TAPS national and regional Survivor Seminars and Good Grief Camps.

Now in their 18thyear, the camps provide support for youths ranging from infants to teens who have lost a parent or sibling in military service, whether as a soldier or as a military contractor. “This group includes kids of service members who died as a result of combat wounds [or] were victims of suicide, car crashes or illnesses,” says Mathewson. “Each child grieves in his or her own way, at their own pace, based on their relationship with their loved one.”

At the camps, children participate in special activities and facilitated support groups. The goal is to teach coping skills to help the children establish and identify support systems, thus creating an awareness that they are not alone in their grief, Mathewson says.

“Children and teens meet others of their own age group to share and learn together,” says Mathewson. “[They] have fun while discovering how to cope with the pain they are experiencing. They learn a lot from each other.”

Counselors and mental health workers spend one-on-one time with the campers. In addition, a military service member is assigned to each child or teen on the basis of the service member’s background matching or resembling that of the person whom the camper has lost.

“It offers [these campers] comfort and support,” Mathewson says. “We really try to find someone who can relate to their culture of the military service.”

Children and teens who cannot make it to the national TAPS Good Grief Camp over the summer in Washington, D.C, are able to attend one of the regional camps held throughout the year in areas such as Fort Riley, Kan.; Parkton, N.C.; Fort Hood, Texas; Ramona, Calif.; Indianapolis, Ind.; and San Diego, Calif. There is also a TAPS trip to Capetown, South Africa, for surviving widows and significant others of service members.

Says Mathewson of the growing popularity of the national Good Grief Camp, “We started out the first year with a dozen kids, and now that’s gone up to 465.”

Nawal Aboul-Hosn, a mentor at the national Good Grief Camp for the past eight years and a member of ACA, says her experience has been life-changing. In fact, the resilience she has witnessed from the way the kids deal with their grief at the camps inspired her to write her dissertation on the subject.

“Being there in the group with other kids gives them a reality check,” she continues. “Being there and seeing other kids crying and sharing their stories makes it real for them and also makes them comfortable speaking when they might not have ever shared some of these thoughts with anyone before.”

The camps are also useful in helping many of the children to finally accept the death of their loved one, Mathewson says. She contends that this reality can be more difficult for children of military backgrounds to accept than it is for other children because of the geographical distance between the children and the service members as well as the nature of the deaths.

“Sometimes, they don’t have something they can see and touch [of that deceased loved one] except for that headstone,” she says.

The four-day experience of the national Good Grief Camp culminates in a ceremony at Arlington National Cemetery. This not only honors the lives of loved ones who have made what Mathewson calls the “the ultimate sacrifice for their country,” but it also helps the children actualize their feelings of loss by seeing memorials for fallen soldiers.

Both Mathewson and Aboul-Hosn contend that children who lose a loved one in the armed services typically navigate and cope with their grief in different ways than other youths.

“It encompasses a lot more than other losses because it deals with accepting reality,” says Aboul-Hosn. “Touching reality is a lot harder. They think, ‘My dad is going to go [overseas], but he’s going to come right back.’ It’s not real for them.”

She recommends that counselors working with military families dealing with loss employ use a storytelling technique — in which parents, siblings and children recall memories of the lost service member — to help them cope. She also stresses the importance of parents not hiding their feelings of sadness while grieving.

“It’s important for parents to share their feelings with their kids and let them know … they’re in the same boat,” Aboul-Hosn says. “When a loss is occurring, they don’t need to be tough.”

Mathewson says spending time helping military families through their grief summer after summer has helped her evolve as a counselor. “The experience of being a part of TAPS has been life-changing,” says Mathewson. “As a mental health counselor and military member, it is an opportunity to do crisis counseling, support families who are grieving a loved one’s death who has served our country, and to see the growth and resiliency of children and their surviving parent over a number of years. This special population helps me grow as a counselor and allows me to acknowledge that the next generation will be resilient and proud of their loved one’s service and sacrifice.”

Counselors interested in getting involved can go to taps.org to determine the location of the camp closest to them. Knowledge or experience working with military families and military members greatly enhances the experience for both the counselor and the grieving military children and teens.

Grief and loss are themes that run throughout so many clients lives. Interested in reading more on the topic? Click here to read the cover story of our June issue, “A loss like no other.”