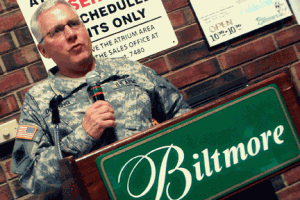 As soldiers return from Iraq and Afghanistan and make the transition from combat to civilian life, counselors should be prepared to help guide soldiers and their families through the challenging time. And, in states with a substantial veteran population, this matter is especially imperative.
Members of the Oklahoma Counseling Association (OCA) are currently dealing with this situation. According to the Department of Veterans Affairs (VA), 324,700 of Oklahoma’s citizens are veterans, or 8.7 percent of the state’s total population.

However, in the past few years, OCA, a branch of the American Counseling Association, has offered various outlets specifically designed to help its members better serve this unique population, such as a veterans “track” of veteran-themed sessions at its annual conference. OCA has also offered certification in eye movement desensitization and reprocessing (EMDR), a modality aimed at treating trauma, including post-traumatic stress disorder (PTSD). And last year, the branch created a new division called the Counseling Association for Military, Oklahoma Veterans and Families (CAMOVAF) to further equip counselors with knowledge on working with this particular group of clients.

The idea to create a veterans track came from Connie Jung Fox, a past president of OCA. Fox, who is also a founding board member of the nonprofit organization Veterans’ Families United, says the idea for the track was spurred by one of Veterans’ Families United’s first events in May 2007 that honored military chaplains.
“One of the chaplains here in Oklahoma City who worked with the firefighters also educated me to the idea that OCA members couldn’t simply have counselors begin to work with veterans if we didn’t know anything about the military culture,” Fox says. “He strongly encouraged me to find ways to bring specialized training to Oklahoma mental health providers, and I took his suggestions seriously.”

OCA introduced its first veterans track, consisting of sessions led by speakers with expertise in working with the military, during its 2010 Mid-Winter Conference.
“The emotional and verbal response from counselors in the room, including veterans, was so strong that I knew we were tapping into something vital and essential,” Fox says, reflecting on the presentation she gave at that conference on “Transitioning War Zone Skills.”

Benjamin Noah, current OCA president and a member of the Association of Counselors and Educators in Government (ACEG), says the sessions the branch offers in the track continue to be well-received at each conference.
“I pulled the conference schedule, and we had five military-related sessions over the two days of the [2010] conference,” Noah says. “All were well-attended; I counted as many as 60 members in some sessions. At the 2011 Mid-Winter Conference, we had only one military session. For 2012, the military track was back with five military sessions. Session topics ranged from therapy with the military family to post-traumatic stress disorder.”
Other sessions covered prolonged exposure, alternative therapeutic modalities and counseling veterans.

OCA invites military personnel to speak to counselors at the conference as well. At the 2012 conference, Maj. Gen. Myles Deering spoke with attendees on issues that service members may face as they return home and how counselors can help.

Cynde Collins-Clark, an OCA member and founder of Veterans’ Families United, says educating counselors on how to properly treat veterans and their families is essential. This is something she knows from personal experience.
“As the civilian mom of an Operation Iraqi Freedom veteran whose war-related behavioral health and physical injuries incapacitated him, I was unfamiliar with the military and the [VA] system of care,” she says. “My son was also a citizen soldier, which meant that he was a member of the Reserves. National Guard [members are] also considered citizen soldiers.”
In 2005, National Guard members and members of the Reserves were said to constitute the largest percentage of frontline fighting forces in any war in U.S. history, with about 43 percent deployed in Iraq and 55 percent in Afghanistan. According to U.S. Defense Department statistics, that same year, there were more than 183,366 National Guard members and reservists on active duty nationwide who had left behind approximately 300,000 dependents.

Citizen soldiers, Collins-Clark explains, don’t have the same structures in place or the same cohesiveness as active duty soldiers; they also lack the daily support system of a military base and the close proximity to care. Because of that, she says, many of them seek civilian professionals.

“Preparing the civilian professionals who may be caring for these veterans and their families who often suffer from caregiving and secondary stress broadens the base of available care,” Collins-Clark says.  ”In Oklahoma, 2,700 National Guard deployed to Iraq in 2007, and over 3,000 deployed to Afghanistan and Kuwait in 2011, the largest National Guard deployment in Oklahoma since the Korean War. Oklahoma has had nearly 30,000 deploy since 9/11, and 35,000 children in Oklahoma have a parent who has deployed. Many of our deployed have served in multiple tours of duty and live in rural areas. It is estimated that eight to 10 people are directly affected by a service member’s deployment. OCA has been keenly aware of these needs and has taken the initiative to step up and offer to serve those who have served.”

Given the immediate need for counseling veterans and the overwhelmingly positive response from members attending veteran-themed sessions at OCA’s annual conferences, Noah and some other OCA members wanted to do more for Oklahoma’s veteran community.

Noah suggested that OCA look into starting a state branch of ACEG — which would later become CAMOVAF — at the OCA Leadership Conference in July 2010.
“I developed a set of bylaws based on ACEG and OCA’s bylaws and set up a volunteer organizational group at the OCA Leadership Conference in July 2011,” Noah says. “The bylaws were written and interim officers appointed at this meeting. The bylaws were brought before the OCA governing board at our October 2011 meeting, and CAMOVAF was accepted as OCA’s newest division. CAMOVAF has been warmly welcomed by OCA members and membership is growing.”

As a veteran himself with 25 years of active duty in the Air Force and two combat tours, Noah personally understands the need for active treatment for returning military members and their families. He adds that he’s especially concerned about the children of veterans.

“My youngest daughter still calls my 15-month deployment for Desert Storm her ‘dark times,’” Noah says. “As a Vietnam veteran, I am deeply gratified by the change in the nation as a whole in its response to our returning military veterans from indifference and outright hostility to an attitude of support and honoring our veterans. Oklahoma has always sent a large number of its citizens into harm’s way. I want our OCA membership to be prepared to support and treat these veterans. The training OCA provides is one way to support our veterans’ needs.”

CAMOVAF is already involved in scheduling continuing education in other areas of Oklahoma outside of what is offered at OCA’s yearly conference.

Georgene Dwyer, public policy and legislative chair for OCA, received her EMDR training in 2011 and says she has had consistently positive results since becoming certified. “I use it every day in my practice,” she says. “I am not seeing a lot of military personnel at this time but have in past months. I am using it in a variety of situations, and it is proving to be very effective, [as] some of my clients are adult children of veterans.”

Though CAMOVAF is still a new division within OCA, members are confident that OCA’s strong support of Oklahoma’s veteran community will continue to yield positive results.

“As the mother of a veteran and a licensed professional counselor, I am profoundly grateful to OCA for their timely awareness of the needs of this population,” says Collins-Clark. “It is incredibly gratifying to be a part of an organization that has made efforts to build bridges of care with all entities — the VA, military and community mental health — to support our veterans at home.”

It was the enthusiasm of OCA members, Fox adds, that helped make these efforts possible. “Oklahomans are a grateful breed,” she says. “The events that we have described here have come together with relative ease. There is a palpable awareness and appreciation among counselors of the priceless debt we owe our veterans and their loved ones. I believe that we will continue to seek ways to bring cutting-edge training to OCA membership to assist in the healing of our veterans and their families.”

For more information about OCA, CAMOVAF or upcoming events, visit the branch website.