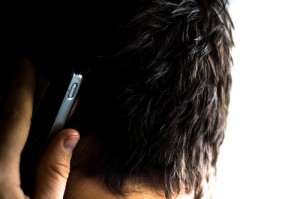 A study from Northwestern University suggests that not only can depression be effectively treated over the phone, but phone therapy can also lead to more patients sticking with treatment.

For the study, which was published in the Journal of the American Medical Association, researchers offered more than 300 patients with major depression 18 weeks of cognitive behavioral therapy, half of whom received treatment over the phone.

“We were able to keep people in treatment using the telephone who would have otherwise dropped out,” lead researcher David Mohr told NPR, “and that group included people with more severe symptoms or other factors that might require continuing treatment. In the face-to-face group, many of those people never made it to week five, much less to the six-month follow-up session.”

As NPR reports, many people with depression say they prefer therapy over antidepressants. But in practice, they often miss sessions with a therapist or drop out of therapy altogether, something that Mohr chalks up to logistics. “Often, they need to travel some distance to get there,” he told NPR. “They may need to take time off of work or away from their family.”