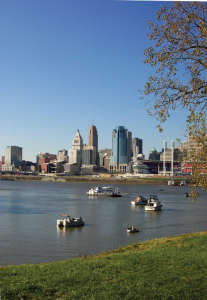 In the past, tourists looking for a vacation hotspot in the Midwest tended to overlook Cincinnati in favor of larger cities. But this diamond in the rough has undergone a cultural transformation throughout the past decade — so much so that well-known travel guide Lonely Planet named Cincinnati one of its top three U.S. travel destinations for 2012. Even so, counselors and their families attending the American Counseling Association 2013 Conference & Expo (March 20-24) might be surprised by all that the Queen City has to offer.

Cincinnati, the third-largest city in Ohio, sits along the Ohio River at the border of Kentucky and close to Indiana. It features unique offerings in the way of food, history and entertainment. Cincinnatians are proud of their hometown, and ACA members who live there are excited to show off all that the city has to offer to conference attendees.

Jewels of the city

G. Susan Mosley-Howard, a professor of educational psychology at Miami University of Ohio and an ACA member, has been living in Cincinnati for nearly 20 years. She says the city’s unique neighborhoods, stunning riverfront views and thriving fine arts community are some of her favorite things about Cincinnati. She hopes her fellow ACA members and conference-goers will take advantage of those features as much as possible while visiting.

When conference attendees have some downtime, Mosley-Howard says they should “definitely go to the Cincinnati Museum Center at Union Terminal, the Cincinnati Zoo [and] Botanical Garden area, explore Findlay Market, take a walk through downtown and simply enjoy a meal on Fountain Square.”

First opened in 1875, the Cincinnati Zoo and Botanical Garden not only is one of the oldest zoos in the United States, but also is consistently ranked as one of the nation’s best, housing everything from gorillas to polar bears to white tigers. The botanical gardens are filled with perennial flowers, native plants, trees, shrubs and various other flora that visitors can take in after they have finished seeing the fauna at the zoo.

The zoo and botanical garden are just a couple of miles from Findlay Market, the oldest continuously operated public market in Ohio. The market, which is brimming with prepared foods, local fruits and vegetables, cheeses, pastries, coffee, and wine and spirits, is open year-round except for Mondays. Visiting Findlay Market is a great way to get both a literal and figurative taste of Cincinnati’s local flavor as well as a bit of the city’s history because the market is located in the notable Over-the-Rhine district.

In the 1840s, Germans immigrated in large numbers to Cincinnati and tended to settle in the northern part of the city, which developed into today’s Over-the-Rhine neighborhood. The area began to go through a resurgence about six years ago and has developed into one of Cincinnati’s brightest cultural hotspots. Locals say Over-the-Rhine offers a plethora of great places to eat and drink and is one of the most diverse neighborhoods in the city. It is also home to Cincinnati’s arts community, including the free-of-charge Cincinnati Art Museum and the American Classical Music Hall of Fame.

ACA member Carl Grueninger, lead counselor for Cincinnati Public Schools and chair of the counseling department at Walnut Hills High School, has family ties to the area. His great-grandparents settled in Over-the-Rhine after emigrating from Germany. “[The neighborhood] has cutting-edge restaurants, the Music Hall [and] 19th-century architecture,” he says.

During that time period, German entrepreneurs built a successful brewing industry that became associated with Over-the-Rhine. Grueninger recommends heading to Moerlein Lager House, which brews its own German-style beer and gives visitors a bit of the history of the area through its drinks.

Getting a taste of Cincinnati

Additionally, Grueninger suggests that conference attendees partake in some of the city’s other unique dining experiences. First, he recommends grabbing a plate of chili — though Cincinnati’s take on the classic dish is a little different than one might expect. The chili itself is a regional take on chili con carne, with different spices and a thinner consistency, but what really sets the city’s chili apart is all of the “ways” that Cincinnatians love to get it.

Chili parlors are abundant in Cincinnati, but Grueninger says the three most popular are Skyline Chili, Gold Star Chili and Camp Washington Chili.

After a satisfying chili dinner, conference-goers might also want to sample a scoop of Graeter’s ice cream, a much-loved regional chain that originated in Cincinnati. “The best ice cream in the world,” declares Grueninger. “My favorite flavor is the black raspberry chocolate chip.” A Graeter’s location in Fountain Square is within walking distance of the Duke Energy Convention Center, where the ACA Conference & Expo will be held.

“Cincinnati’s Fountain Square is the center of our city,” Grueninger says. “Whenever someone comes to visit the city — an important politician, when we win at sports or when the Choir Games are in town — we gather at Fountain Square. It is about two blocks from the convention center where the conference will be held, and many of the hotels people will stay at are either surrounding Fountain Square or are only a few blocks from it.”

For those conference attendees looking to unleash their inner carnivore while in Cincinnati, Grueninger suggests heading to the Ohio River to dine at Montgomery Inn at the Boathouse. “Former presidents, the late Bob Hope and many sports figures all would eat here for the famous ribs,” he says. Or attendees can check out Jeff Ruby Steakhouse, located on Walnut Street in nearby Fountain Square, for what Grueninger considers the “best steaks in town.”

A new hub of activity

Locals also recommend visiting a newly developed neighborhood called The Banks, located (logically enough) along the banks of the Ohio River. The city recently revamped this riverfront area, turning it into a stylish hub of activity that is within walking distance of the convention center. Among the neighborhood’s highlights are Smale Riverfront Park; the National Underground Railroad Freedom Center, where visitors can learn about the history of slavery in America and investigate their genealogy; the Taft Museum of Art, which features unique works of art, both from Cincinnati artists and from artists around the world; and the Cincinnati Reds Baseball Team Hall of Fame, which is the largest team hall of fame in the United States. Visitors can also tour the former home of President William Howard Taft, located in The Banks district. Additionally, Harriet Beecher Stowe, author of Uncle Tom’s Cabin, used to reside a couple of miles northeast in the Walnut Hills neighborhood of Cincinnati. Her home is available for tours as well.

There are also interesting places to drink in The Banks, such as Moerlein Lager House and Toby Keith’s I Love This Bar & Grill, owned by the country music star and presumably named after his hit song “I Love This Bar.”

Because of Cincinnati’s close proximity to Kentucky, it is also easy to venture outside of the city during one’s stay. “You can walk across the river on the Purple People Bridge” — a pedestrian-only walkway known officially as the Newport Southbank Bridge — “or the John A. Roebling Suspension Bridge, [which] Roebling designed … before the Brooklyn Bridge, and visit Newport on the Levee or Covington, Kentucky,” Grueninger says. “Riverboat cruises are available also.”

Mosley-Howard adds that getting around the city, which is 80 square miles, shouldn’t be difficult for conference attendees. “If you are staying downtown, walking is easy,” she says. “The city’s metro bus system is good, however, to get around in the city core.” For more information on Cincinnati’s metro system, visit its website at go-metro.com.

Both Grueninger and Mosley-Howard are looking forward to having others in ACA experience the charm and positive spirit they see every day in Cincinnati.

“Cincinnati is known as a friendly city,” Grueninger says, “and I hope to meet many of my fellow counselors in March.”

For more information on the ACA 2013 Conference & Expo, including tours of the city provided by ACA, visit counseling.org/conference.

What travel sites are saying about Cincinnati