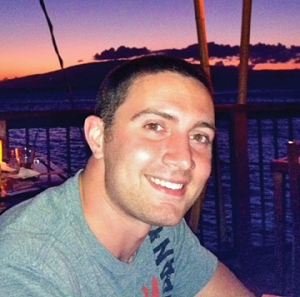 Alex Teves loved trying new things: going to a hole-in-the  wall neighborhood restaurant that his friends had overlooked; drinking a new beer from a local brewery; pushing himself to the limit in an 8-mile obstacle course known as the Tough Mudder; bringing together groups of people who wouldn’t ordinarily run in the same circles for a surprisingly great night.

Teves, a 24-year-old Arizona native, recent counseling psychology graduate and American Counseling Association member, was among those killed during a mass shooting inside a movie theater in Aurora, Colo., on July 20. Even as friends, family and former professors mourn the loss of Teves, they are recalling how the comic book lover’s adoration of superheroes spilled off the pages and into his everyday life, as he constantly put others first and left the world a hero himself.

Alex’s father, Tom Teves, believes one of the reasons his son loved reading comic books about superheroes so much was because he possessed a particularly strong sense of right and wrong. “He was a good kid,” Tom says.

“It’s hard to remember Alex and be mad or angry,” says former roommate Kenny Yamamoto, “because every memory I have of him is something fun or something funny.”

Yamamoto met Teves two years ago when they both enrolled in the University of Denver’s counseling psychology program. Of the 23 students in their year, only six were males. So, Yamamoto says, “most of the guys made a pretty strong bond pretty quickly.”

He and Teves loved to spend their free time exploring the local brewery scene and eating at places their friends wouldn’t normally try. “He knew how to make the best out of every situation,” Yamamoto recalls, citing Teves’ magnetic personality. “Alex was always the center of attention, but not in a bad way. He was always the one cracking jokes or going out and socializing and meeting new people.”

Tom says Alex delighted in blending people from different walks of life. “He would bring disparate groups together who wouldn’t normally hang out with each other, and he would just sit back and watch them [socialize],” he recalls.

During Teves’ final year of high school, his fellow seniors, 1,000 strong, showed their love and appreciation for him by holding an “Alex Teves Day.” The entire class wore Teves’ unofficial “uniform” — blue jeans and a white T-shirt — an apt representation of Teves’ down-to-earth, good-guy quality. “Alex was just that kind of guy,” his father says.

At the funeral, attendees donned Teves’ trademark outfit to honor their friend.

‘Exactly what you would want in a counselor’

Both Tom Teves and Yamamoto believe that Alex’s positive attitude and people skills drew him to the counseling profession. “He just knew if you were feeling bad,” Tom says, “and he would make a silly face to try and cheer you up.”

“Alex was a kind, loyal and genuine soul,” says his mother Caren. “Alex lived his life with pure joy and truly appreciated all that life had to offer. … [His] enthusiasm for life, and the spirit in which he lived it, was contagious and inspiring to all those who knew him. A hero in many ways, Alex selflessly dedicated his life to helping others by his actions every day of his life.”

Teves graduated from the University of Arizona in 2010 with a bachelor’s degree in psychology. Julie Feldman, a University of Arizona professor in the Department of Psychology, told the Arizona Daily Star that while an undergrad, Teves mentored a teenage boy who was receiving mental health services for two semesters in 2009.

“[Alex] was pretty special,” she said in an interview with the newspaper. “He was probably one of our best mentors, and that feeling was shared by my graduate supervisors that worked directly with him.”

Tom also recalls Alex’s desire and commitment to helping children. “He spent a lot of time helping troubled kids in college and grad school,” he says. “In college, he participated in a Big Brothers Big Sisters-type program. He would miss football games to take them to Fiddlesticks [a family fun park] so they could ride the go-carts.”

After graduating from Arizona, Teves went on to study counseling psychology at the University of Denver and earned his master’s degree this past June. His focus was in community counseling, Tom says.

As part of his graduate studies, Teves began interning at the Humanex Academy in August 2011 and continued working there until May. The private, alternative middle school provides academic, social and behavioral skills training for students with learning and behavioral disorders such as autism spectrum disorders, attention-deficit/hyperactivity disorder, depression and bipolar disorder. Teves’ responsibilities included providing individual and group counseling to the 55 children attending the school.

Dave Miller, a counselor at Humanex and one of Teves’ supervisors during his internship, says Alex’s disposition and love of the job allowed him to thrive. “He was very positive in nature. He always looked at things in a positive light,” Miller says. “He had a golden heart. He was outstanding [at his job]. He was exactly what you would want in a counselor.”

“He developed some really good relationships with the kids there,” Miller adds. “At the memorial service we held for Alex, some of the kids got up to speak about him, and all of them said things like, ‘He was nice. He helped me deal with a lot of my problems.’ He touched a lot of kids. … They were all really hurt when they found out he didn’t make it.”

Miller says Teves was always selfless when he came to work. Even when he was stressed about his final papers, he refused to take time off unless Miller insisted. “He always wanted to be there for the kids,” Miller says, “and that was a really great thing.”

Miller adds that Teves’ attitude of self-sacrifice was on full display the night of the shooting in the movie theater. When the shooting started, Alex immediately lunged in front of his girlfriend of one year, Amanda Lindgren, and shielded her from the spray of bullets. “That was totally his attitude and how he’d deal with things,” Miller says. “It was always [the mind-set of] taking care of everyone first, then dealing with his stuff.”

Caren says Lindgren was more than a girlfriend to Alex. “She was the love of his life,” Caren says, “and he told us many times they were to be married in time. They are soul mates in the true sense of the word.”

Humanex Academy has renamed its weight room after Teves and is in talks with Caren about setting up a scholarship fund to honor him. Other memorials and fundraisers have also been established in Teves’ name. Copper Kettle Brewing Company, a locally owned brewery (Teves was the youngest member of its brew club), held a fundraiser in Teves’ honor for the Michael J. Fox Foundation for Parkinson’s Research to help Caren, who has early onset Parkinson’s. Additionally, Tom and Caren are in the process of creating a scholarship fund for troubled youth in their son’s name. And University of Denver student Rumi Nishimura, founder of local volunteer organization Cranes for Joy, asked students and community members to fold 1,000 origami cranes in Teves’ memory. The paper cranes are considered to be a symbol of love and healing.

ACA member Mary Gomez, a counseling psychology professor at the University of Denver and one of Teves’ graduate program advisers, says the entire campus has felt the impact of the tragedy. She says she will always recall Teves as a bright spot among her students.

“Alex will be remembered as an intelligent young man with a passion for living life to the fullest,” Gomez says. “Alex viewed life as an adventure, whether he was participating in the Tough Mudder competition last summer with his friends, doing class projects and presentations with his peers, or interning at a site for special-needs students. He was insightful and respectful to his peers and faculty. He was a compassionate and kind person with a great sense of humor who put a positive outlook on all situations. Most importantly, his top priority was his relationships. His loyalty is admirable, and he always put his friends first. Both faculty and students feel blessed to have been able to get to know Alex, and he will be truly missed.”

As Gomez surveys her students, fellow professors and a community that must rebuild after a senseless tragedy that took the lives of 12 individuals and injured 58 others, she says counselors will play an important role in the healing process and possibly in helping to prevent future tragedies. However, “the mental health field really needs more support in terms of social programs, and they keep getting cut,” Gomez says. “Also … more preventative work needs to be done. There needs to be so much more education on the warning signs and the importance of mental health professionals to the public.”

Miller also thinks this tragedy shines a spotlight on the need for more mental health services. “The families directly involved would benefit from long-term counseling, especially those individuals who were hurt or were in the movie theaters. … For the bigger picture,” he says, “ I would hope our state and our country would learn from our mistakes. It seems with all tragedies [such as this one], there have been warning signs.” Miller hopes the nation as a whole will place more focus on finding ways to help those who are struggling with mental health issues, intervening long before issues have a chance to escalate out of control.

At the request of a nearby school, the University of Colorado Denver, ACA recruited association members who were licensed professional counselors and who possessed training in disaster mental health to provide pro bono individual and group counseling to faculty, staff and students to help them cope with the aftermath of the Aurora tragedy. ACA volunteers served as daytime “drop-in” resources at both the university’s Anschutz Medical Campus in Aurora and its downtown campus in Denver.

After losing his son, Tom believes legislation should be put in place that would make it mandatory to cross-reference a person’s mental health history when he or she attempts to buy a gun. “How do we live in a society where you can buy a machine gun with 6,000 rounds and nobody asks why?” he says. “There’s something wrong.”

Tom is also pushing the media to accept the “Alex Teves Challenge” and stop mentioning the names and showing images of individuals who commit mass acts of violence, thus making them unjustly notorious. “All details of their life that are pertinent can be shared, but the press should eliminate this incidental benefit of infamy by not using their names or likenesses because it has no relevance,” says Tom, who believes the media is partly to blame for the Aurora shootings and similar incidents that receive nationwide and worldwide publicity.

For Yamamoto, the loss of one of his closest friends has yet to fully sink in. But the support demonstrated by the Teves family, by his professors and by his cohort has carried him through the dark times.

“I have been so incredibly amazed by Alex’s parents throughout this process,” Yamamoto says. “I can’t imagine what they’ve been through, but they are making such an effort to make sure all of Alex’s friends are OK. The faculty [at the University of Denver] has been great [too]. We’re all counselors, so our first instinct is to take care of each other.”