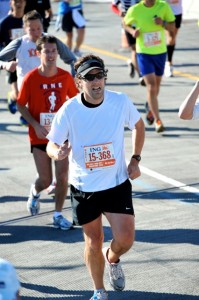 Tim Alderson, a member of ACA and the Alaska Counseling Association, turned his thesis paper into something more.

Tim Alderson, 37, has enjoyed running in marathons ever since high school. But he never thought he would be able to apply his hobby to an internship and graduate thesis paper at the Hiland Mountain Correctional Center, an all-female penitentiary in Eagle River, Alaska, and perhaps more surprisingly, eventually to a nonprofit organization.

In September 2011, Alderson read an article in Runner’s World about a group of volunteers in Topeka, Kan., who began a running club and held marathons for the female inmates at the Topeka Correctional Facility. The club, at least anecdotally, he says, seems to have had an extremely positive influence on inmates — especially on their mental health and behavior.

“I saw that article and a light bulb went off,” Alderson recalls.

Curious and inspired, he contacted the group, Running Free, and asked the volunteers how they got started. Alderson decided that for his thesis paper for Alaska Pacific University, where he was obtaining his master’s in counseling, he would copy the group’s profile and create a similar program. Then, he would quantify the impact of a structured running program on dimensions of prisoner mental health.

Alderson enrolled 25 inmates in the study in January of this year. He began by administrating questions from the World Health Organization Quality of Life Assessment Brief Form (WHOQOL-BREF), asking the women about their psychological health, their physical health, their environment and their social relationships. Then the women followed a 12-week running protocol for 5K races that was developed by the Furman University Institute of Running and Scientific Training and practiced within the confines of the penitentiary.

At the end of the 12 weeks, 21 of the 25 women had completed the entirety of the training. Two of the women who dropped out did so because they had been released from prison.

Alderson says the prison staff informed him that this retention rate was impressive in itself. However, his findings were equally inspiring:

As a runner, Alderson says he intuitively expected to see some benefit when comparing the pre- and post-test scores.

“I thought running would be a way to bridge the gap for these women,” he says. “It’s three hours a week where they can just be thought of as runners and not as anything else.”

However, Alderson continues, “where it gets interesting is when you look at the individual domain scores for the WHOQOL-BREF.”

Alderson says he expected to see changes in the inmates’ psychological and physical scores, as those aspects are supported by research, but the changes he saw in the women’s social relationships and environment were more surprising.

Universally, the inmates reported a lack of close personal relationships during their pre-program interviews.  “Themes of mistrust, criminal thinking and fear were frequently cited as reasons for not forming close bonds with other inmates,” Alderson says.  “However, at follow-up, their tune had changed.”

The comments the inmates made to Alderson about growing closer and developing longstanding bonds with one another are “consistent with a statistically significant increase in the social relationship domain score on the WHOQOL-BREF,” he says.

Alderson says he could also tell from the way they started to spend time together as a group outside of workouts.  “You could often see them eating together and chatting in the common areas of the prison facility,” he says. “One staff member even told me that she had complaints from other inmates because the runners were always talking about their running.”

One added variable that Alderson didn’t expect was that the inmates would have to train through one of the harshest winters in Anchorage’s history, which required almost all of the runs to be held inside a gymnasium. During the inmates’ final 5k race, they had had to circle the gym 68.5 times.

But Alderson says he believes that, in some respects, the close quarters ended up being a positive. “It built cohesiveness in the group by being so close together,” he says.  “They really had to get to know each other and work out their differences.  It was one additional obstacle they had to overcome together, and there is value in that.”

When Alderson’s study and the 5k at the Hiland Mountain Correctional Facility were complete, he knew that the program had produced such positive results in the women that it had to continue.

So he created the nonprofit Running Free Alaska — 44 inmates are currently participating and preparing for a race on Oct. 6.  They train three days per week under the guidance of 12 volunteer coaches.  Through donations and a partnership with local running store, inmates are provided with appropriate running shoes, just as they were during Alderson’s study.

Running Free Alaska is the second program of its kind after the Topeka program, and it has since sprouted off others. A group in Colorado has said it is interested in using Alderson’s model, and Run Free Texas has recently launched its program.

Alderson says he can see why the model has caught on nationally.

“I think our program is elegant in its simplicity,” he says. “With nominal training and almost no cash outlay, this program can be added to the treatment milieu in all types of institutional settings. At the end of the day, we aren’t a social program nor a rehab program. At its heart, it’s a running program, run by runners for runners, for the express purpose of making better runners. All of the benefits we saw in the study from a rehab and mental health standpoint were really just byproducts of this running endeavor. I think that is incredibly liberating relative to some of the other treatment programs in the correctional system. By focusing on running, we don’t have to reconcile our own values with the crimes committed by the inmates. Our volunteers can think of the inmates solely as runners and not as a problem to be fixed. The accomplishment of completing a 5k gives [the runners] a sense of control that they can use in all aspects of their lives.”