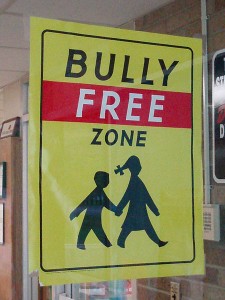 PACER’s National Center for Bullying Prevention has once again marked October as Bullying Prevention Awareness Month in an effort to raise awareness of the physical, mental and emotional effects of bullying that millions of adolescents experience. Various American Counseling Association members recently shared their thoughts on common bullying trends and how they believe schools can confront this rising problem.

Melissa Luke, an assistant professor and coordinator of school counseling at Syracuse University, says that by recently passing the Dignity for All law, her state of New York has made positive strides in the battle against bullying. The law states that “all children have the right to attend school in a safe, welcoming and caring environment” and prohibits the harassment and discrimination of students.

“As such,” Luke says, “many local school districts are more proactively addressing issues of bullying. Thus, this is a topic that is covered in our school counseling courses, and one that almost always arises within the school field experiences.”

She suggests that schools utilize Comprehensive, Developmental School Counseling (CDSC) programs, which are considered best practice when it comes to combating bullying. These programs include both preventative and responsive interventions designed to reduce bullying. The interventions are delivered individually, in groups and through schoolwide programming.

“Although there are many prepared psychoeducational lessons that focus on bullying prevention, I believe that it is extremely important to distinguish between the often fluid role of perpetrator, target, and bystander,” she says. “Because the vast majority of students fall into the latter category, it is important that they are able to recognize their part in the perpetuation, as well as the prevention, of bullying. In my observation, offering students a range of skills that they can practice and then use when observing bullying behavior is very helpful.”

Luke always encourages her school counseling students to use data to determine the specific areas of need related to bullying prevention, as well as to assess the effectiveness of the implemented programs.

“Not only can this quantitative and qualitative data inform revision to one’s CDSC program, but it can also be used to raise awareness,” she says.

Luke also suggests raising awareness of the need for anti-bullying programming through promotions such as newsletters and national campaigns. “Overall, I think school counselors have an obligation to address bullying directly,” she says, “but they also can be quite effective in combatting the [issue] indirectly through improving school connectedness, student belonging and school climate.”

On the basis of reports from her internship and practicum students, Luke says the issues for which students are bullied have remained much the same over the years.

“[Bullies are] targeting those that are different in some way,” she says. This usually includes some element of racial, ethnic, religious or sexual-affective and gender identity, level of ability, size or relational factor, she says.

Keba Richmond-Green, an ACA member and counseling student who works with gay, lesbian and bisexual youths and their families, says the trend she is noticing is an increase in the bullying of GLBT American Indians and Alaskan Natives.

According to statistics from the School Bullying Prevention Task Force, Richmond-Green says half of all American Indians and Alaskan Natives report being bullied and physically assaulted.

“It has been my experience when working with youth and parents that the problem lies mostly with the staff and administration,” she says. “There are a few incidents of peers who are bullying, and the staff does not have the proper tools or resources to intervene properly. For the most part, staff and administration continue to ignore the problems and deny that there is a problem within their school system. If a problem is found, there is [often] retaliation against the victim as well as the aggressor.”

Richmond-Green has found that administration officials are often too busy or unaware of bullying problems within their school districts to properly address the issue.

“Bullying prevention programs and policies are often put into place as a last resort in order to avoid legal ramifications,” she says. “Many times the policies are on paper only and not followed through with by the staff or student body throughout the school year. Oftentimes these policies leave out the most fundamental problems when addressing bullying. Therefore, the underlying problems still are never addressed. Many times incidents are not being documented correctly or at all and then not carried over into the new school year.”

Richmond-Green believes one of the keys to reducing bullying in schools is through teaching students what she calls a “no discrimination zone and attitude.”

“We must learn to embrace diversity and differences in others and ourselves,” she says. “[Students] must be shown and taught that ‘different’ is not wrong.”

But for this to occur, adults have to facilitate this behavior and occasionally change their own mindsets, she says.

“We have to be honest with ourselves and others and acknowledge our biases and prejudices,” Richmond-Green says. “We also must acknowledge that we are often uncomfortable when things are outside of our comfort zone. Once it is acknowledged, then we must practice a place of safe, healthy, and respectable boundaries for all people. … Young people are resilient and tolerant of change. It is the adults who have to work to change their thinking and behavior in order to produce effective change within the system.”

She says the first step in addressing bullying and discrimination is acknowledging that a problem exists.

“Many times we are so busy trying to dispute that there is no problem, we [instead] often make more problems,” Richmond-Green says. “Second, we must get back to involving the parents, community, law enforcement, religious affiliations and students in the planning. We have to get schools back involved in the community. Unless we include all of these entities in the initial planning processes, nothing will ever change. Everyone has to be involved to support each other and to develop necessary guidelines and procedures that are realistic – appropriate for the times and problems in the 21st century – and measureable.”

Sheri Bauman, professor and director of the school counseling master’s degree program at the University of Arizona, echoes calls for a holistic approach regarding who should be involved in bullying prevention programs.

“The research is pretty clear that it takes a whole-school program – not just curriculum, not just a slogan or assembly – with a strong commitment from educators to make anti-bullying a priority,” she says. “At a minimum, there needs to be a clear policy that is widely publicized, developed with input from educators, parents, students and the community.”

Bauman, author of Cyberbullying: What Counselors Need to Know, published by ACA, also believes in the importance of adults modeling to youths how to treat others respectfully.

“Currently, some excellent research focuses on the impact of bystanders,” Bauman says, “so programs that provide strategies for bystanders to use when they witness bullying can be very helpful. The intent is to provide knowledge and skills so bystanders do not support the bullying or just observe, but actively intervene. For this to happen, there needs to be a school ethos that promotes anti-bullying as a collective goal and responsibility. Educators and all adults in the school should be trained to recognize bullying, to understand the harmful effects, and to respond effectively when it occurs.”

It is equally critical, she adds, that punishment not be the only option in response to bullying.

“There are a number of nonpunitive, counseling-based approaches that have had encouraging results in other countries that are not well-known in the U.S.,” Bauman says.

She believes students probably already have a high awareness of bullying. However, she does not think they are necessarily cognizant of the serious and long-term harm that results from it.

“Students need to realize that the impact of victimization is neither trivial nor short term, and for chronic victims, the negative effects may last into adulthood,” Bauman says. “They also need to realize that bullies can learn to change their behavior, and that other students – bystanders – are extremely powerful in helping them do so.”