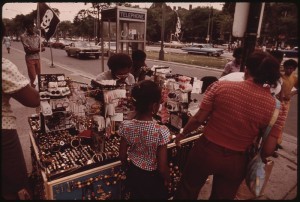 As a child living in public housing on Chicago’s South Side, I never realized that what I experienced growing up could be considered “abnormal,” “high-risk” or a “community failure” by other people.

I could not play outside after dark because this is usually when the shooting started. I very often had to run in the house as a child and stay away from windows. I assumed that most children my age, at least the ones who looked like me — black — had shared similar experiences. The truth is, I did not know many people who were not black. My neighborhood was 99 percent black. I read about the dangers of being a poor, black male and the risk of adolescent girls of color. Those risks personally pertained to me when I was growing up. You will always be affected by the violence in your community, even if indirectly. The black boys or young men that statistics refer to as being at greater risk for violence, incarceration or violent death were our brothers, fathers, sons, significant others or spouses. The struggle of being a black girl, someday a black woman, had its countless risks.

You see, in counseling research we talk a lot about privilege, marginalization, diversity and cross-cultural experiences. But what happens when you are the “other,” the minority as the counselor? The textbooks I read talked a lot about ways to work with minority clients, and most of the traditional theories were based on middle-class white people. However, most counselors are white women. “So, who exactly were the authors referring to when they talked about cross-cultural experiences in counseling?” I often asked myself.

Back to the basics: I lived at home with my mom, dad and one sister, who is seven years younger. My parents were never married. As the oldest child, I had a lot of responsibility with helping my parents with my sister. Both my parents worked full-time jobs. They were even lucky enough to afford to send my sister and me to the local Catholic school in our public housing neighborhood where my dad worked as a janitor. I now understand that we were a part of what is called the working class. I always felt offset from the other kids in the neighborhood. My parents were not on drugs, which many other children’s parents were. My parents worked, and my parents invested a lot into my education. I enjoyed school and learning was fun for me. My sister and I always had nice material things, and therefore I was quite unaware of my social class status. Other kids in the neighborhood often called me “different” because I went to Catholic school and did not get into the drugs and gang activity in the community. I often felt they were right and chose not to try to fit in.

Many researchers write about the invisible privilege that comes with being white or being wealthy. My poorness was invisible to me because my violent community and overpriced clothes and shoes were assumed normal. I had protective factors as well. My grandmother was active in my life, and she valued the church. My family was pretty large, and we all supported one another in the community. But what happens to the “average” child who views these negative behaviors, mannerisms and culture as normal? These children usually repeat the behaviors as the only way they know to live. Having gone to the local Catholic elementary school, I was able to go to any Catholic high school in Chicago on a scholarship with my full tuition paid. Going to college was discussed from the day I entered high school. This was not the case with my friends who attended the local public schools. By the time I started high school, my parents had split up, and it was my mom, sister and I. Things were different then, being raised in a single-parent home. However, we maintained our “status” with our fashion. A couple of years later, my mom had another child — my brother, who is 16 years younger — and at that point, she became a single mother of three. However, our “status” as we knew it was maintained.

My mother chose an all-girls Catholic school as the high school of choice. This school was located in a middle-class suburban neighborhood not too far away from my public housing neighborhood. The girls at this school mostly lived in two-parent homes with married parents. Their parents usually were college-educated and owned their homes and vehicles. These young ladies had cars by their junior year of high school. Although I never really felt as though I completely fit in with the children in my neighborhood, there was something different about being around those girls. First, I enjoyed being there because they all accepted me for who I was — or maybe who they assumed I was? The girls said I didn’t act like I was from the projects, and they were quite surprised that I had been there my entire life. I remember one girl said, “Those girls are rough and loud, and you’re quiet and smart.” Other experiences at school included girls asking about the violence in the projects and stating how scary the projects were. Again, I was usually surprised by the feedback I received from others and was surprised that they had not experienced the same things.

So many people say that children who grow up in the “projects” are likely to drop out of school, fail or end up in negative life circumstances. Because none of these things happened to me, I must be the “exception” to that rule. I heard that a lot, and I started to dislike the fact that people viewed me as an exception because to me, what that meant was that they felt that I should have failed because of my socioeconomic status.

Currently as a doctoral candidate, I understand my experiences as being part of social mobility. My becoming educated had everything to do with me not wanting to live in the projects forever. I yearned for the nice things educated people seemed to have. Also, as my mother always said, I was smart, so it seemed inevitable for me. As a counseling intern working with very few minority students and going to predominately white institutions, I often wonder how many young, black girls could be sitting exactly where I am but are not. If only they had parents who, although they were not educated themselves, valued education and saw it as a “way out.” Maybe those girls lacked the motivation, or maybe they just simply lacked the availability of resources that I had received despite what the statistics say?

So, does that make me an exception? Most children in my neighborhood went to the local public school and then the military high school. Some individuals, even at my Catholic elementary school, did not take advantage of the free scholarship to private high school because of uniform, transportation and book costs.

Now, when I read an article that relates to social mobility and the price you pay for it, I think of myself. When I visit my old neighborhood, I am admired, yes, but I am also shunned. Somehow, I am not like everyone else because a majority of my childhood friends are still there. To say the very least, I am the only one I know pursuing a Ph.D. There were a few who went on to college and many who went back home. The point of clarification is that I lost a lot of people who I was close to because of my social mobility. I have other friends who I share more values and goals with. I live in an environment with low crime rates where I would not typically worry about gunshots or being robbed. You see, although I am very proud of my accomplishments, they came with a price. I am still me, and I always will be. However, apparently, I am a different sort of me. I have privilege that others do not share. My son goes to private school, he wears preppy clothes, he speaks proper English, he vacations with family — many of these things individuals from my community see as “acting white.” My son understands that education is valued. Fortunately, he will not have the same struggles that his dad and I once had. The funny part is that those struggles went mostly unnoticed by me. I thank my parents for protecting me from the violence in the neighborhood, for creating morals and values in our home, and for helping me gain respect for others and myself.

As a counselor and counselor educator-in-training, I oftentimes have to receive supervision to decrease the risk of countertransference when I work with young women who come from poor backgrounds. I develop a soft spot and have been told a few times that my sensitivity to my clients is genuine, almost as if I had experienced what they were going through. Maybe at times this was the case, but mostly I am humble. I am humble because I grew up with many “have-nots” and I’ve worked hard to “have.” I am humble because, despite the adversities I have faced, I am successful and my family is proud. I understand that there is pressure behind my successes; however, I am proud of me as well. I admire the first-generation college student who decided to come to counseling to work through her personal issues in order to maintain her academic success. So yes, there is sensitivity, and yes, it is genuine, and no, I will not apologize for that. It is what makes me a great counselor. My counseling textbooks did not discuss many of the experiences I’ve had myself as a counselor, but I have had many good supervisors to thank for helping me understand my emotion as it relates to my counseling.  So I appreciate the supervisors who have encouraged me through positive feedback on my clinical skills and have made me comfortable with my personable and sometimes non-traditional style of counseling.

Mashone Parker is a doctoral candidate in counselor education and supervision at the University of Iowa. She earned her master’s degree in clinical counseling from Eastern Illinois University. Her clinical background is in college counseling and counseling adults with developmental disabilities. She has been awarded the Dean’s Graduate Fellowship at her institution. Throughout her studies, she has developed a passion for researching best practices in career counseling and social justice for minority youth and social class issues in school settings. Parker serves on multiple committees relating to diversity across campus, such as the diversity committee and the Society of Black Graduate & Professional Students. She is committed to multicultural issues. Parker can be reached at mashone-parker@uiowa.edu.