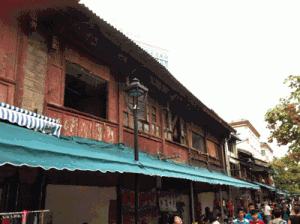 An American Counseling Association-sponsored People to People Citizen Ambassador Program to China gave 17 counselors, counselors and teachers the opportunity to expand their worldview and learn about mental health in a country with a culture different from their own.

The trip allowed delegates — most of whom are ACA members — to collaborate with Chinese students, counselors and workers on topics relating to the counseling profession and to experience cultural activities around the country.

During the program, which was held Aug. 13-25, delegates learned about Chinese culture in unique ways: from exploring local neighborhoods to visiting two of the country’s top universities to observing Chinese counselors in their element. The delegates learned about mental health issues affecting Chinese students, children and adults, about career options for Chinese workers and about what the country’s environment is like for counselors. Attendees had the chance to visit and listen to presentations at places such as the Jinghui Soul Education and Counseling Center, the Career Center at Tsinghua University and the Jie Su Tenzin Orphanage.

People to People began in 1956 when it was founded by President Dwight D. Eisenhower. ACA has previously partnered with the organization to send counseling delegations to countries such as Russia, Rwanda, South Africa, China, Tibet, India and Brazil. While this trip was sponsored by ACA, all travel expenses were paid by People to People and the delegates.

ACA member Tammy Hurst’s first experience with People to People was in 2011, when she went on an ACA-sponsored trip to Brazil. The trip focused on multicultural counseling and was a positive experience, she says.

The August People to People trip to China was Hurst’s first trip to Asia, she says. “I had wanted to visit there for a very long time but never knew how it would work out. When the trip was announced as a multicultural counseling delegation, I knew I had to go.”

Hurst says getting to know the Chinese people she met was one of her favorite parts of the trip, helping her to expand her cultural competencies as a counselor and an American.

“My ideas of what China would be like stemmed back to my childhood when I was told that it was a communist country and was made to believe that it was a cold, gray place with busy and unfriendly people,” she says.

But these notions were quickly challenged the more she encountered the country’s people and culture.

“Today, I am so thankful that I know better,” Hurst says. “I am quite honestly overwhelmed at the amazing hospitality and warmth shown to myself and the entire delegation by every Chinese person we met. The trip reinforced my belief that we should not rely on what we hear in the news, on the radio or even often times from our own families. We must be brave and open to explore the world around us. We must see and touch for ourselves and then form our opinions about our fellow humans. I am forever changed by their sense of loyalty, their passion for life, their seriousness about life, their drive and their wonderful peaceful nature.”

Though ACA member Bill Fenson says visiting Asia for the first time on this trip crossed more things off his bucket list than he can count, he, too, admits to having some preconceptions about what the culture would be like.

“I knew as a tall, large, Caucasian male that I would stand out in the crowds,” he says. “I had only traveled one place before that it was so evident that I was a tourist.”

However, Fenson says, he was greeted warmly wherever the delegates went. “Pleasingly, I wasn’t shocked or embarrassed by the stares or photos,” he says. They were very compassionate, asked for photos and [are] ultimately not so different [from Americans].”

The experience with People to People made Fenson realize how important it is for counselors to travel abroad.

“We get the privilege of representing the United States and sharing the knowledge that we have gleaned from our experience with others,” he says. “I can only think this was a shared learning experience and that we now understand them more than we could from reference books or articles. The experience of a communist country with friendly, idea-sharing and cheerful professionals was not expected.”

Hurst, too, says she believes that one of the best ways to develop cultural competencies is to actually experience other cultures firsthand.

“I feel that a counselor can read all of the books, stories, magazines [and] journals they want about any certain culture out there and they would still know very little,” she says. “Counselors tend to be very intuitive and sensitive people, [but] they need to actually get hands-on experience with the populations they serve. There is no better way to try and relate to our clients than to know something experientially about their culture, language and beliefs. Books would like you to believe that a people are all the same. It is so very important for counselors to realize and experience the fact that all people from a certain nation or culture are all not the same, just as we Americans are very different from each other. When asked how to best serve Chinese American clients in the States, one wonderful counseling professional said to our group, ‘Just remember that we are people, too.’”

Jane Goodman, a past president of ACA, led this year’s group, as she also did for the 2009 delegation to China. She went to the country for her first time with People to People in 1985. Goodman says the experience on this trip was “fascinating, enlightening, fun, sometimes challenging. As we met with people who do what we do, in a country that is so different from ours in so many ways, we were consistently amazed that they are so similar in their challenges and approaches.”

One thing Goodman noticed on this year’s trip is how rapidly the mental health landscape is evolving in China.

“Most of the places we visited had only been in operation 10 years or fewer,” she says, “but [there] are sophisticated counselors with knowledge of the same theories and approaches as Americans and the wisdom to apply them in their own cultural context. [On] my 1985 trip, things were very different and counseling didn’t really exist.”

Although this wasn’t her first time, Goodman says she still managed to learn new things, even as a group leader.

“I find that not only do I learn new things,” she says, “but I ask new questions. For example, on this trip, because the U.S. ‘falling behind’ educationally has been in the news so much, I pondered how one can motivate students without terrifying them and creating as much anxiety as Chinese students have.”

After experiencing China through this unique lens, Fenson is ready to take another type of adventure.

“As a direct result of this trip,” he says, “I am currently seeking an international position based outside the United States to actually work in unfamiliar geographic areas and become an open resource to familiar and unfamiliar venues.”

Fenson says he is grateful for such a positive and rewarding experience.

Goodman adds that the experience has also renewed her faith in the counseling experience.

“I have a renewed respect for the impact of counseling on people’s lives, its power and its universality,” she says. “I am again reminded of the strength in a group, as 17 people who did not know each other bonded and shared both great moments and sometimes the need to help each other with challenges.”