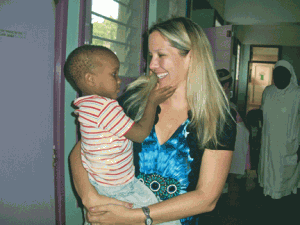 Each year, the Gilbert and Kathleen Wrenn Award for a Humanitarian and Caring Person is presented to a member of the American Counseling Association who goes out of his or her way to help others without fanfare or any thought of receiving recognition. But Brandé Flamez, who earlier this year was named the 2012 Wrenn Award recipient, has arguably taken the definition of a charitable spirit to another level, choosing to donate all of her award money to a primary school for students with disabilities in Tanzania.

Flamez spent six months raising funds for hospitals, orphanages and schools in Moshi, Tanzania, where this past summer she co-presented a mental health training program to teachers and priests. During the fundraising effort, Flamez reached out to the Corpus Christi community as well as to past students and teaching assistants from Texas A&M University Corpus Christi. She also received contributions through her website and private donations. In addition, rather than giving Flamez a gift when her term as president was over, the Gulf Coast Counseling Association made a monetary donation to the cause.

Flamez ended up raising a total of $9,000, which went to Rainbow Orphanage (an orphanage for children from birth to age 5), Upendo Orphanage Center (which houses older orphans), two schools, Kibosho Hospital and the Psychiatric Wing of Mawenzi Hospital, both in the Moshi area. In addition, she donated her $1,000 monetary prize from the Wrenn Award to St. Francis, a primary school for students with special needs.

“St. Francis is close to my heart,” Flamez says in explaining why she donated her award money to the school. “This is the only special needs school in the area, [and] it serves as more than a school. I had no idea the way children with disabilities were sometimes treated [in Tanzania]. I had no idea the need to build schools not only to advance their education, but also to give them a safe place to live.”

The students St. Francis serves — children who are blind, hearing impaired, cognitively impaired or albino —  do not have their educational needs met in government or religious schools. Moreover, these children are generally looked down on by much of the Tanzanian community, Flamez says, and are sometimes the objects of hostility. In fact, the location of St. Francis is purposely hidden to provide protection for its students.

Unfortunately, not every child escapes harm before coming to the school. While at St. Francis, Flamez met one young girl who was missing both of her arms. “A man from her village came in [the
middle of the night] and chopped them off simply because she was albino,” Flamez says.

Flamez is currently working to help add a secondary school onto St. Francis, which would allow these special needs students to continue their education there after graduating from the primary school.

During her month in Tanzania, which began in late June, Flamez, along with another Walden professor, Judy Green, and the Rev. Matthew Munishi, a local priest who earned his master’s degree in mental health counseling in the United States, provided Mental Health Facilitator training to teachers and priests in the area. The training was done in conjunction with the National Board for Certified Counselors International. The community warmly welcomed and appreciated their presentations, Flamez says.

“Several priests and teachers contacted us to return to Tanzania to present again,” she says, “because they often find themselves in counseling roles, yet there is not a higher degree offered in counseling in their country.”

Flamez has seen firsthand how important counseling skills are to the helping professionals in Tanzania, a country with no government-supported social services whatsoever. “The people of Tanzania are facing struggles that we in this country cannot even conceive of,” she says. “Tanzania is one of the world’s poorest nations, where the average person lives on less than $1 per day. Most families have no running water or electricity. They walk up to 10 miles a day to sell their vegetables or fruit at local markets. Day-to-day living is a challenge on every front. The nuns running the orphanages are dealing with children who do not have enough food or clothing, in addition to [having] abandonment issues.” She reports that “the AIDS epidemic [in Tanzania] is very high, so it is not uncommon for men and women to reach out to a priest or a teacher for support.”

Next year, Flamez and Green plan to return to Tanzania and offer the Mental Health Facilitator training to another group of teachers and priests, as well as to nurses.

Flamez credits her mother, Rosemary, for sparking her interest in service, social justice and advocacy as a child, as well as inspiring her empathy for others. “As a single mom, she took me to Mexico City on mission trips,” Flamez says. “We also delivered meals to AIDS patients [and] worked in soup kitchens when I was very young. The thing that stood out for me by watching her do this was that she always did everything with love and respect. She took the time to show me what it means to be compassionate, to take time to listen to one’s story.”

These defining experiences stayed with Flamez and played an important role in her college application process. “When I was looking at a college, it was important that I find one that not only had a strong academic program, but one that was committed to service and would help foster and allow me to grow in my commitment to service,” she says.

Flamez’s desire to help the less fortunate in other countries grew further during her undergraduate studies at the University of Notre Dame, which placed an emphasis on community service. Additionally, she was inspired by her professors, both inside and outside of the classroom.

“Just seeing how they tied their experiences with Third World countries to [their lessons] made me realize no matter what profession you are in, you can always extend a hand to the underprivileged,” Flamez says.

Flamez traveled to the Democratic Republic of Congo as an undergrad and donated medical supplies to the country’s hospitals. And during a two-year stint with AmeriCorps after her time at Notre Dame, she helped to build the first all-girls school in Rwanda.

Performing service work in Tanzania earlier this year “was kind of a journey of keeping my ties to Africa,” Flamez says. “[And] as far as counseling goes, there weren’t a lot of counseling organizations going over there.”

Flamez hopes her story will encourage future recipients of the Gilbert and Kathleen Wrenn Award for a Humanitarian and Caring Person to donate their prize money to a charity or to a cause abroad for which they feel passionate. She also emphasizes the importance of all ACA members nurturing a holistic worldview and doing what they can to perpetuate change on an international level.

“Part of our role as counselors is to promote social change through a commitment to improve the human and social condition by creating and applying ideas, strategies and actions to promote the worth, dignity and development of society,” Flamez says. “There is a wonderful quote by John Donne that captures why I think service and social justice is important anywhere in the world: ‘No man is an island, entire of itself; every man is a piece of the continent, a part of the main.’ To me, social change, advocacy and service are not only evolutionary, but also reciprocal. We know from history that education is the foundation for peaceful and just societies. As global citizens, I believe we have a responsibility to not only work within our communities, but to extend our services to Third World countries.”

For more information or to donate to Flamez’s current Tanzania project, visit brandeflamez.com.

ACA National Awards nominations due Nov. 16The 2013 American Counseling Association National Awards, including the Gilbert and Kathleen Wrenn Award for a Humanitarian and Caring Person, will be presented at the ACA 2013 Conference & Expo in Cincinnati in March.

ACA divisions, organizational affiliates, branches, chapters, regions and committees can also submit nominations. All nominations must be postmarked by Nov. 16.

Complete information is available on the ACA website at counseling.org under the “Resources” tab, or you may request a 2013 National Awards Packet by calling ACA Leadership Services at 800.347.6647 ext. 212. Nominations should be submitted electronically to hclubb@counseling.org.