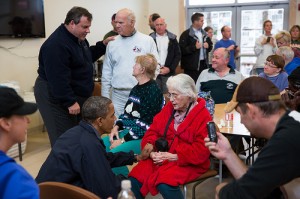 As the East Coast recovers from Hurricane Sandy, a historic “superstorm” that claimed 110 U.S. lives and left an unthinkable path of destruction in its wake, Counseling Today reached out to a few American Counseling Association members living in affected areas. We asked them to share their thoughts on how counselors can be of help in both the immediate aftermath of Sandy and also in the long term. Next up to share her thoughts is Ilana Levitt, president of the New Jersey Counseling Association.

Ilana Levitt, a resident of East Brunswick, N.J., compared living in the immediate aftermath of Hurricane Sandy to “living in the Twilight Zone.”

“It’s almost a complete lockdown,” she says. “There’s no gas stations open, no food [stores open]. All businesses are shut down.”

Levitt is living in a home currently without power, which is making it, not surprisingly she says, “really cold.”

In addition to the discomfort, Sandy’s aftermath is also making things dangerous.

“An 80-foot tree [fell and] missed my dog by minutes and my house by feet,” she says.

Looking outside of her own personal experience through Sandy and viewing the disaster as a counselor, Levitt says crisis counseling, especially meeting disaster victims’ basic needs, is what is most acutely needed right now.

“There are immediate needs for food, clothing, medical supplies and the issues of loss, grief and finances are all going to come,” she says. “I think people can’t fully process what’s going on because they’re in the trauma phase right now. Even inland where I am right now, people are cold and need to eat.  People need to see family members and take care of basic needs before anything else.”

Levitt believes the full scope of the storm still remains to be seen. She says the immediate impact has been tremendous, but the actual full impact might not be known until later. The effects have ranged from people losing property to people sustaining injuries and finding themselves unable to get needed medications. The impact, Levitt says, has been widespread — financial, health and safety all included.

Levitt, a career counselor and consultant who runs a private practice, knows that the businesses destroyed during the storm and the time employees take off in its wake will have an impact, too.

“They say this is going to be the most costly storm in history,” she says.

The storm will also impact more than the roughly 14 states directly affected by the hurricane.

“Given new technologies and social media, counselors are in touch and working with people face-to-face, remotely and are connected in many ways,” Levitt says. “Counselors all over the world will end up interfacing with people who are impacted by this storm.  Businesses are so global now, [so] the effects of this will be seen for a long time.”

In terms of helping those recovering from Sandy, Levitt recommends counselors go through community or government programs — don’t show up without being asked or provide expertise in areas you are not familiar with.

Grief counseling isn’t appropriate in the immediate aftermath of a natural disaster like Sandy, says Levitt. “Right now is about safety and stabilization.”

And when it comes to counseling storm victims in the weeks to come, Levitt says not to assume people want to talk. “Some people want to share their traumatic stories, other people may not,” she says. “You have to meet them where they are. There’s a huge range of emotional reactions, [and] a huge range of ways that people are impacted that we may not expect. ”

She also stresses the importance for counselors to remember self-care, as that can sometimes get lost in the midst of helping others cope. Levitt says she went to a yoga class as soon as it was possible for her to do so after Sandy hit. In addition, Levitt says, maintaining a positive spirit goes a long way.

Levitt says she is grateful for the role social media is playing in keeping residents connected. “Even without TV or radio, they still have Facebook and Instagram to show the devastation and keep information coming,” she says.

She is also amazed by the human spirit, the power of which is truly evident in a disaster such as Hurricane Sandy, she says.

“People are coming together even though there is enormous devastation,” Levitt says.  “I’m surprised by the damage but also by peoples’ strength.  It’s important to   also recognize the positive in a crisis.”

Read part one in this series.