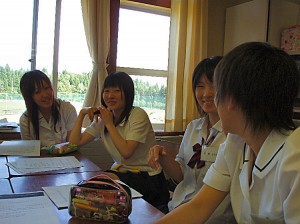 In the September issue of Counseling Today, Courtland Lee, president of the International Association for Counselling and a past president of the American Counseling Association, wrote a “Through the Glass Darkly” column on counseling globalization. In it, he posed several important questions for counselors to ponder to become globally minded/competent and also suggested that the counseling profession can add value to people’s lives and promote human growth around the globe.

This is a reply to that article from Japan, where counseling and similar services have long existed, but the development of the profession and the quality of the services seem to be far behind those in the United States. Key questions are if and how the counseling profession can add value to people’s lives and promote human growth and development in Japan, and how to evaluate that progress empirically. Answers will be provided through three steps. First, a rough sketch of the current status of the school counseling profession/service in Japan will be introduced. Second, guided by Lee’s five questions, and based on my personal experience as a private practitioner, a description of community counseling in Japan will follow. Third, suggestions will be made for empirically proving the potential and actual contributions that the counseling profession could offer for improving the quality of life for Japanese citizens.

It may not be altogether misleading to describe the current state of school counseling in Japan as being in an era of a Sputnik shock, at the dawn of the profession. After having long struggled with bullying, school refusal and other related issues, the Ministry of Education in Japan finally began placing what they called “school counselors” in a small number of public schools on a trial basis in 1995. Because of the ministry’s focus on middle school problems, it has mainly placed counselors in public middle schools. According to the Ministry of Education, as of 2006, it had placed “school counselors” in about three-quarters of Japanese public middle schools, about 7.7 percent of public elementary schools and approximately 20 percent of public high schools.

Another major issue is that those “school counselors” consist mainly of clinical psychologists with master’s-level education who didn’t get appropriate training to work with school students. The ministry also hired general practitioners in each district to serve as school counselors. To make matters worse, as part-time employees, these counselors typically work at each school only four to eight hours per week. Considering those numbers and the nature of the school counselor’s work, how can we expect that Japanese students are getting appropriate school counseling services?

I had seen a ninth-grade client for 12 months. She and her parent told me that they could not make use of the school counseling service as much as they wanted to because the counselor visited her school only every two weeks or so. Instead, the student saw a school nurse and an assistant teacher almost daily to share her experiences and feelings. Their story was similar to my volunteer experience at a local special school for students with school refusal a few years prior. I observed that these students had only a once a week visit by a “school counselor,” who stayed a few hours doing nothing more than chatting with assistant teachers while observing students.

As a former high school teacher, I was very concerned that the school nurse was the only mental health care provider in most schools in Japan. Unfortunately, the situation hasn’t changed much as of today. It seems obvious that at least in public school settings, counseling services in Japan have failed to add value to most students’ lives in spite of the huge government spending. One bright side of this story is that with more and more adolescents being provided a chance to get counseling services at school, future generations will have easier and more comfortable access to the mental health services in this country.

Helping practices in the community in Japan

As a U.S.-educated private practitioner working in Japan, I have kept asking myself what value my counseling service could have in this society. While reading Courtland Lee’s article, it occurred to me that answering the five questions he posed might lead me to the answer.

• How do they perceive (mental) health and illness in Japan?

Thirty out of the 100 new clients I interviewed during the past 15 months explicitly described themselves as suffering from depression symptoms or having a diagnosis of the disease.

Their narratives indicate that “a real illness” requires you to have clear physiological symptoms or functional somatic complaints, which could be mainly brought about by misfortune and should be removed by experts. On the other hand, they seem to take health as a normal functioning they used to enjoy but have lost and are grieving for.

Traditionally, when seeking emotional and psychological help, Japanese people tend to depend on authoritative figures such as high-ranking Buddhists monks, respected elders and general practitioners in the community. Forty-one of my 100 clients had seen a psychiatrist or psychosomatic physician before visiting my office, and most of them told me they were very disappointed about how they were treated. Some even complained that doctors were very arrogant as well as verbally abusive. Nevertheless, most could not find other options. On the other hand, 38 clients reported they had seen neither a counselor nor a psychiatrist before. Without a charismatic therapist such as Dr. Phil on Japanese TV programs, counseling appears to be a somewhat unknown profession for many Japanese individuals, especially for those older than their 40s.

• What models of helping does Japanese culture/society have?

As mentioned previously, the most general and simple model of helping in Japanese culture is one built on an authoritarian relationship. This is based on the belief that people need help because of their immaturity or lack of experience or knowledge. They seek help from those who are supposed to possess such wisdom and character. In particular, Buddhist monks, with or without formal counseling training, have offered “free counseling services” for the general public, and some temples establish a counseling center as an annex.

Another major but more complicated helping model is founded on a nonverbal amae relationship. Amae is a Japanese word meaning indulgent dependency — typically that of an infant on its mother. A Japanese psychiatrist, Doi, introduced this psychoanalytic concept that “bridges dependence and attachment” to explain differences in mentality between Americans and Japanese. According to Doi, although Americans and Japanese are equally dependent on others, maintaining a dependent posture is much more essential for smooth and functional relationships in Japan. In other words, it is not too much to say that quasi-parental relationships underlie all the hierarchical relationships in Japan, including the helping relationship. Originating from the early symbiotic relationship between mother and child, amae is inherently nonverbal. He wrote, “Japanese are extremely sensitive to the feelings surrounding interpersonal relationships and tend to neglect verbal communication.” According to this model, Japanese culture requires the greater part of help to be given nonverbally, which could make huge differences between the help-seeking attitudes of Japanese and that of most Westerners.

• What is the relationship between indigenous helping practices and counseling?

Although Buddhist monks play the role of counselor at their own unique counseling centers, they seem to belong to the indigenous helper group. As previously mentioned, their practice is mainly based on an authoritarian relationship, at least ostensibly. Most of these monks are without any formal counseling training and do not charge for their services. This means they do not have to take on any professional liabilities or obligations.

On the other hand, it seems that many Japanese people have started to appreciate the helping services provided by the new helping group consisting mainly of clinical psychologists who work at schools and/or in the community. Forty of 100 new clients at my center told me this was their very first time using counseling services. Although health insurance does not cover counseling services in Japan, clinical psychologists from nationwide-accredited programs enjoy a certain degree of credit for being reliable helpers and can obtain professional liability insurance (through their organizations) that is approved by the Ministry of Education.

In my view, the distinguishing characteristic of all helping practices in Japanese society is that both those who seek help and those who offer it are in a relationship tinted by the scents of traditional authoritarianism and amae, as well as much more modern egalitarianism.

Doi’s clinical observation and resultant theory suggest that most psychological helping practices in Japan are under the strong influence of the amae mentality. This leads us to the following hypothesis concerning ethical aspects of helping practices in Japan. Derived from the infant-mother relationship, the helping relationship in Japan is probably inclined to emphasize the quality of connectedness between parties rather than justice and fairness, such as professional responsibilities and obligations on the part of the provider. In other words, while the ethical helping practices in the Western world could be said to be founded on Kohlberg’s theory of moral development, those in Japanese society are founded on Gilligan’s theory of moral development. In addition to how monks provide their counseling services for the general public, my professional experience seems to support this hypothesis. During their first interview, some clients asked me if they could call me outside business hours in case of emergency, suggesting their emotional need for around-the-clock care.

Now, what value can my counseling service add to Japanese lives? Can the U.S. counseling theory and practice that I learned be adapted to Japanese culture/society? And more important, how can I prove this empirically? I believe that possible answers exist in the descriptive statistical analysis and data gathered in my counseling center, a small part of which I described earlier. Furthermore, in addition to collecting demographic/descriptive data, we could generate overarching themes among our clients’ stories. For example, from a tentative thematic analysis of my clients’ stories, two possible overarching themes have emerged. In working with those suffering from an authoritarian/abusive relationship, I used a feminist approach to empower them. On the other hand, I adopted a psychoeducational approach to help those entangled and stuck in an amae relationship. I hope my counseling service added more global perspective to the lives of those who visited my office.

Finally, how can I prove the usefulness of my counseling service, which is a unique hybrid of the Eastern and Western helping practices in Japanese society? As James Hansen stated in Counseling Today’s September cover story on evidence-based practice “the essence of counseling is the relationship between the counselor and the client.” Each of these relationships is unique and special in its own way. The usefulness of the relationship must and could be proved not so much by quantitative statistical analysis but by qualitative data analysis of the termination or follow-up interviews with our clients under their cooperation. It could also be supplemented by demographic/descriptive data with minute attention so as not to violate our professional confidentiality obligations.

Yukio Fujikura is an American Counseling Association member who runs a private practice in Yokosuka, Japan. Contact him at postmaster@ezcounseling.jp.