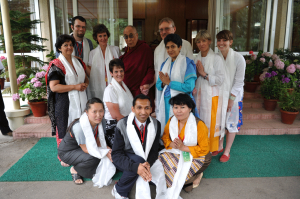 Sachin Jain has been taking counselors, counselor educators and counseling students to rural India for the past six years in an effort to expand their worldviews and give a real-life picture of how individuals in different socioeconomic statuses live. But this past June, trip participants had an even more meaningful experience when they met the Dalai Lama.

The group spent 11 days traveling through the rural, poverty-stricken Indian countryside. In the process, they also got to to know exiled Tibetans living in the region.

“My goal is to expose the audience to a different lifestyle,” says Jain, an assistant professor of counseling at Oakland University and a member of the American Counseling Association, the Association for Counselor Education and Supervision, and the Association for Multicultural Counseling and Development. “It’s not even necessarily about experiencing different cultures, because there are different cultures within the United States. I try to organize my trip in the rural parts of India where there are no five-star hotels so [attendees] can see and experience how the people really live.”

The attendees, who were alerted about the trip through counseling Listservs, were from various parts of the United States. Jain is originally from Rajasthan, India, located in the northwestern part of the country, so he possesses firsthand knowledge of the stark contrast between the countries’ cultures.

“The rural lifestyle in India is so different [that] if you have never been there before it is … a big shock,” he says.

Jain says taking American counselors to this part of the world helps them gain perspective. “It forces you to live that lifestyle and it forces you into self-discovery,” he says. “You rely mainly on internal resources, and that is an important part of counselor training.”

Contending with these elements for an entire week and a half also allows the counselors to change their mindsets more permanently than if they simply sat in an hourlong session on multiculturalism at a counseling conference, Jain says. “[At conference], they always have in the back of their mind that they can leave these sessions and go back to their comfortable hotel rooms,” he says.

The purpose of the conference, which ran from June 11-15, was to provide professional enrichment to Tibetan school counselors and give them a platform to meet and exchange experiences with other counselors, especially those utilizing Western approaches in their counseling practices. Jain himself presented a session at the workshop titled “Revisiting [the] American Counseling Association Code of Ethics.”

The Dalai Lama’s talk focused on education of students and how teaching should have the broader goal of emphasizing the individual’s path to spirituality and inner peace and the individual’s role in world peace efforts. Afterward, attendees were given the opportunity to ask the spiritual leader questions.

Jain describes the experience as “mesmerizing.”

“You are in a totally different dimension,” he says. “Being in his presence is like being on autopilot.”

The Tibetan counselors who attended the conference — and who follow mostly Eastern counseling practices — use the gathering to gain a better perspective of Western approaches to counseling and to enhance their professional development. But Jain says the conference provided his fellow American attendees with the opposite experience, showing them the importance of integrating Eastern practices into their counseling approaches.

“Most of the counselors [on the trip] had never interacted with any Eastern philosophies in the past,” he says. “And except for a couple of us, most had never been outside of North America, so this was their first time expanding their horizons and being out of their comfort zones. It was a win-win situation for both groups of counselors.”

Jain believes it is important for counselors to use a combination of Eastern and Western philosophies in their approaches. “Neither one is complete without the other,” he says.

Jain says he regularly combined Eastern and Western approaches when he used to counsel middle school and high school students, as well as when he spent time at community counseling centers as an addictions counselor.

He used a similar protocol with the students he counseled, and added in positive psychology methods. “You need to have emotional and spiritual levels of happiness too,” he says.

Attending the conference and meeting the Dalai Lama not only reaffirmed Jain’s desire to continue the trips, but also opened new professional doors for him. Upon returning home to the United States, he co-wrote a proposal with fellow counselor educator Mark Stauffer titled “The Internationalization of Counselor Education in Tibetan School Communities in India” based on his experience. His proposal was recently awarded $10,000 in funding from Walden University’s Faculty Research Initiative Grant (FRIG) Program.

Jain’s study will examine how successfully CTA school and mental health counselors are able to synthesize Western mental health techniques with their current practices, which mainly focus on Eastern and Buddhist philosophies.

“We want to see what’s working and what’s not,” Jain says. “All of these counselors have [a] master’s degree in counseling, but all their experience is mostly limited to Eastern practices.”

He is also looking forward to pursuing his research because he believes it might offer a unique perspective.

Jain envisions his research to be the beginning of a long-term, beneficial partnership with counselors living in rural India and the clients they serve.

“What is learned globally and what is practiced here is so different,” Jain says, “ so we hope to help serve their needs of professional development.”

He also hopes his efforts might eventually help to fix the dearth of mental health professionals in that part of India.

“When we talk about rural India,” Jain says, “there are more clients here than counselors [can handle], and there is not enough professional development in these areas to help [make it better]. That is why I am looking forward to continuing my efforts with this.”