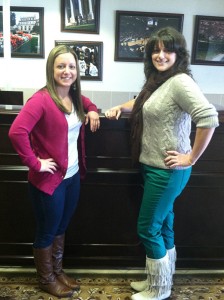 When historic “superstorm” Hurricane Sandy tore through the East Coast this past October, more than 120 lives were lost and countless others were changed forever, as storm victims were forced to rebuild homes, businesses and lives in the aftermath. Two counseling students at Monmouth University in West Long Branch, N.J., decided to help in any way they could — even if it didn’t necessarily result in practicing any counseling themselves.

Monmouth students Jennifer Trimarchi and Ellen Brody, both members of the American Counseling Association, knew they wanted to get involved with Hurricane Sandy relief efforts even though they were not qualified to counsel survivors. In order to be eligible to provide counseling, students had to be at the practicum or internship-level of the counseling program — Trimarchi and Brody do not begin that until the end of this month.

“When [Hurricane Sandy] happened, we met with our professor because we wanted to do something for the people in the area who had been affected,” says Trimarchi, who is also president of Monmouth’s Counseling Students Association (CSA).

Joanne Jodry, a counseling professor at Monmouth University, says the students filled an important role that some of the members of the disaster relief crisis teams could not. “Some of the people on the teams didn’t have any houses,” says Jodry, who is the CSA faculty adviser and a member of ACA and the New Jersey Counseling Association. “It was really up to them.”

As coordinators on behalf of Monmouth University, Trimarchi and Brody were in charge of signing up interested counseling students to join relief efforts, which were coordinated through the Federal Emergency Management Agency (FEMA) and Monmouth County Division of Mental Health & Addiction Services, and assigning students to the sites. They also coordinated the efforts of other non-practicum-level counseling students who wanted to help. These students participated by joining in cleanup efforts and donating supplies and food.

Trimarchi and Brody were completely in charge of the endeavor since Monmouth faculty members were consumed with their own rebuilding efforts post-Sandy, Jodry says. Though many of the faculty from Monmouth’s psychological counseling department also participated by frequently visiting FEMA sites to assist the students and provide any supervision necessary when they could.  Trimarchi and Brody’s coordination efforts lasted from the end of October until around Christmas, when the government was able to hire individuals to provide the counseling services that the students were offering.

Jodry was able to be the connection for the students to FEMA through the Monmouth County Division of Mental Health & Addictions. Each county has its own disaster crisis team, connected to FEMA, and coordinated with local officials who were notified that the students were interested in helping.

“These two were just amazing with the amount of work they did,” Jodry says. “They came in and worked their fingers to the bone. They were on call 24 hours a day.”

“The efforts of the Monmouth University students was a critical piece of the response, and I am very appreciative of their help,” he says. “It was really a self-directed response.”

Most of the counseling students were sent to an evacuation shelter that was originally located at Monmouth University but was then relocated to the Monmouth Park Race Track. At one point, Horvath says, the shelter’s population swelled to roughly 1,100 inhabitants.

The students filled a very necessary gap at the shelter. “FEMA people were helping these people deal with bureaucratic things such as signing papers and getting help from the government,” Horvath says. “But a lot of these were people who were crying, and a lot of these people needed handholding, and that’s where these Monmouth University students came in.”

This was especially important, Horvath says, because about half the team of regular responders had been personally affected by the storm.”

Most Monmouth students hail from places outside of the New Jersey shore area, making it easier for them to volunteer, as they were not as directly impacted by the hurricane.

Brody says she enjoyed the role of coordinator because she was able to help in multiple ways. “I did want to help in some way, and although I couldn’t provide counseling [myself], I did want to help my peers who [needed] to get those hours for graduation as well as help those in the community get connected with the services they needed.”

Some of the Monmouth counseling students were interning at sites that were closed down because of the storm, so they used the FEMA sites as part of their supervised practice.

Trimarchi feels she impacted the community and made a difference in the victims’ lives even though she was not on the ground with them.

While Brody’s home was not impacted by the hurricane, she lost her job at the café where she worked in Monmouth Beach. “They’re still in the process of completely renovating and gutting it,” she says.

Brody says she was grateful to take on the task of coordinator because it gave her a way to channel her desire to help the hurricane victims.

Trimarchi says the role of acting as a coordinator came naturally to her. “People asked me, ‘Are you stressed out? Are you overwhelmed?’ But honestly, I was happy to do this,” she says.

Since acting as a coordinator, Trimarchi is now hoping to get trained in crisis intervention counseling. “I don’t think I had an interest in that before,” she says. “God forbid this ever happens again, I do want to be more prepared.”

Brody feels a renewed sense of faith in her career path since the coordination efforts.

“It’s definitely [reaffirmed] that this is the career path I want,” she says. “All these people can band together and bring that sense of community back together. We were all disconnected [after Hurricane Sandy], but these counseling students can go into the community and bring the community back together, and that is a powerful thing. Coordinating these efforts proved even more strongly that being in the counseling profession is exactly where I want to be.”