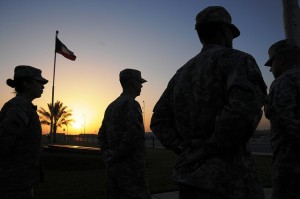 Despite recent efforts from the Department of Defense to stem the rise in military suicides, the number of service members who took their own lives last year appears to have topped the number of troops killed in combat.

Despite the Pentagon’s recent efforts to hire more mental health workers, begin a long-term study of mental health for military personnel and expand the reach of mental health services for service members and their families, there were 349 active-duty suicides in 2012 — a record high.

Art Terrazas, grassroots advocacy coordinator for the American Counseling Association, believes if it were easier for licensed professional counselors to join in the Pentagon’s efforts, then the rising military suicide numbers would have a better chance of decreasing.

“The news is deeply saddening and, at the same time, troubling,” Terrazas says. “Any loss of life is tragic, and that tragedy is compounded when someone falls victim to suicide. What is also troubling is that despite the fact that mental health in the military has gained more attention in the past year and more efforts have been made to address mental health care, we continue to fall short of meeting the goal, which is reducing or eliminating suicides among our service members.”

Last year, ACA conducted an aggressive outreach campaign to various media markets to highlight the fact that the Department of Veterans Affairs fell behind in its efforts to recruit and obtain all available mental health clinicians, specifically licensed professional counselors.

ACA’s Public Policy Department believes the DOD has still not done enough to get military personnel the mental health services they need.

“From our point of view, if you are going to do all that you can to meet the mental health care demands of the troops, then that means you are going to utilize all the tools at your disposal,” Terrazas says. “[The DOD] is not doing that. They are sidelining thousands of counselors from working with our military members because of rules that they have created. The DOD is putting up its own barriers when it comes to recruiting every mental health clinician to combat this very serious problem.”

Terrazas says he hears from counselors across the United States almost every day who are being denied work at VA facilities.

“Many of these counselors are veterans themselves,” he continues. “Counselors have not been given the chance to help combat this problem simply because the government hasn’t allowed them to be part of the solution.”

ACA member David Fenell is one of those counselors who has been on both sides of the fence. As a colonel and behavioral sciences officer with the U.S. Army and Army Reserve, he retired in 2009 after 26 years of service, which included tours in Afghanistan and Iraq. Since then, he has counseled soldiers returning from deployments on how to fit back in with their families at home.

When Fenell first heard the news of the suicide numbers, he says he “felt sad that so many of our warriors were so desperate and in such pain. I was sad that they found no options, other than suicide, to relieve that pain and desperation. We try to prepare our soldiers to be resilient and provide them with tools to face adversity, but that training does not seem to have helped those who took their lives.”

Fenell believes the DOD has a lot of helpful programs for military personal in need. “Unfortunately, these programs were either not accessed by the struggling warriors or were not effective if used,” he says. “I know the DOD is currently reassessing its suicide-prevention strategies.”

Fenell points to a Dec. 24 issue of Army Times, which, he says, “reported that about half the 301 service members who committed suicide in 2011 had accessed a mental health provider or received inpatient care before committing suicide. About a third of these had received services within 90 days of their deaths. Over 50 percent of the service members who committed suicide had no known mental health diagnosis. Over 70 percent were drug- and alcohol-free at the time of their death.”

Part of the problem continues to be stigma, Fenell says.

“Service members may seek help but may not fully disclose the depth of their pain because they don’t want to appear weak,” he says. “Also, military mental health care, because of the intense demand for services, can be sporadic. So a client whose depression deepens may not have an appointment scheduled and may be unwilling to call emergency services.”

Lynn Hall, dean of the College of Social Sciences at the University of Phoenix and author of the book Counseling Military Families: What Mental Health Professionals Need to Know, agrees.

“My thoughts go to what are we not doing for these service members and how can life seem so hopeless [for them],” she says. “We talk about moving beyond the concept of the stigma of seeking help, but doesn’t this indeed suggest that we haven’t done enough to decrease this stigma?”

Hall, a member of ACA, says she has found through her research that three conditions are typically present when a suicide occurs:

With members of the military, Hall says, the first two conditions are present. “Military are trained to use weapons and have weapons available and, at least for those in combat, have experienced death. Therefore, it is only the third condition that perhaps we have not focused on enough in the mental health world.”

The most common characteristics of military life are change and transition, Hall says, and with any change or transition comes grief and loss. The power of accumulated grief over time to lead to high levels of distress is often not recognized, Hall says. “Every person in a military environment must learn how to make healthy transitions, and perhaps everyone going into the military needs to be assessed for prior loss and unfinished grief.”

The relevant questions then become, Hall says, “Does something in the military experience trigger this fear of being a burden on others? Is this what pushes service members over the edge? Being a burden on their families and/or their communities because of their emotional state or even their physical injuries?” If so, Hall says, “might we not focus on this aspect of ‘healing’ for all in the military, or possibly focus more on preventative measures in military training?”

Terrazas believes utilizing counselors is one of the only ways to reduce the number of suicides in the armed forces.

“Federal agencies have made the decision to place barriers that keep counselors from treating service members, military families and veterans,” Terrazas says. “Even though past congresses and presidents have clearly stated that counselors should be part of the effort to treat invisible wounds of war, there seems to be an effort in several agencies to promulgate rules that keep counselors from working [with] the VA and the DOD. Those rules need to be changed so that we can start getting as many mental health clinicians as we can into this fight. It wouldn’t require an act of Congress, it wouldn’t require a lot of hoops to jump through. All it would take is for the administration to [make] some common sense changes so we can get people the help they need. [Counselors] have not been given a chance to help solve the problem.”

Fenell, too, thinks counselors could play a much greater role in the effort to reduce military suicides.

“Licensed professional counselors are trained to establish effective and continuing therapeutic relationships with their military clients,” he says, “and many suicidal service members need a stable, ongoing, supportive relationship to help get through the darkest periods of their depression. Counselors can effectively provide that type of intervention.”

Additionally, Fenell points again to the Army Times issue which states that the most noted causes of military suicide were broken relationships, workplace problems and financial problems. “Licensed professional counselors can be effective in helping in each of these problem areas,” he says.

Hall says she believes that on a local level, “Every single counselor, social worker, psychologist, even physician, who sees a service member must be screening for suicide ideology. This is not something that should happen only when there is a crisis or major loss, but with everyone. We in the mental health world are perhaps not paying close enough attention to the accumulation of grief/loss issues and assume that if someone ‘looks’ healthy because they are capable of functioning, that they are indeed healthy.”

She also questions whether society has the responsibility of raising boys in a less stereotypical way, teaching them that “being a warrior with all its ingrained messages about being dependable, not needing help, being strong, not being weak or invincible is not the ultimate demonstration of being male. The military is, for some young men, the exaggeration of this stereotype, and we may not have enough up-front assessment of our young people to determine the reasons why someone joins.”

It is ACA’s hope that the suicide rate will go down to zero next year. But unfortunately, Terrazas says, there is no indication that will happen.

“The RAND Corporation told us that in 2009, we lost more service members to suicide than we lost in combat in either Iraq or Afghanistan, and 2012’s numbers are higher than they were in 2009,” Terrazas says. “While there has been a lot of work and a lot of resources have been dedicated towards ending this terrible problem, we as a country are still failing and we as a country need to do more. We just hope that both the Department of Defense and the VA will finally listen to recommendations that ACA has made over the past year so that we can get more counselors where they’re needed. And we hope that we all remember this and remind ourselves that this is part of the true cost of war. This is part of the price that we pay when we activate the members of our armed services, and it’s a cost that we should never forget.”