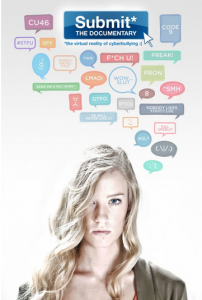 Attendees of the ACA Conference in Cincinnati on Friday had the opportunity to watch a private screening of the new documentary Submit before it received its world premier in Atlanta on March 23. Producer Ashley Reid was on hand to discuss the roughly hourlong documentary focused on cyberbullying and the catalyst it has become for teen suicides.

Submit features engaging, honest and sometimes heart-wrenching interviews with today’s teenagers, who are often left to confront the realities of cyberbullying on their own. Parents of teens who took their own lives after being cyberbullied also share their stories, as do educators, experts and law enforcement personnel who are struggling to find solutions to this sinister problem.

But Reid said the purpose of the documentary is not just to shine a light on the problem but “to push us toward a solution.” Toward that purpose, the Submit team has launched a website, SubmitTheDocumentary.com, where counselors, parents and other stakeholders can go to get fact sheets and access other resources. The website also invites users to share their stories, regardless of whether their experience with cyberbullying has been as a victim, a bully or a bystander.

Two of the strategies the documentary promotes are encouraging bystanders not to stand by and remain silent when they encounter instances of others being victimized by cyberbullying, and teaching and advocating for more empathy among teens.

Sheri Bauman, an American Counseling Association member who was integral in bringing the film screening to the ACA Conference, is working with the Submit team to develop a users guide for the film that educators can use. Bauman, the author of Cyberbullying: What Counselors Needs to Know, published by ACA, will be presenting an education session titled “Working With Perpetrators and Targets of Cyberbullying” on Sunday as part of the ACA Counseling in Action Demonstration Series.

Reid encourages counselors to contact her at ashley@submitthedocumentary.com to share their thoughts on cyberbullying and to discuss what resources they need in the fight against cyberbullying.