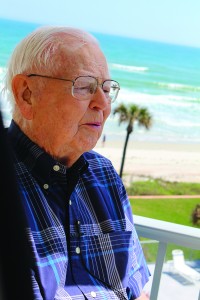 Last year, I had the wonderful opportunity to visit with Robert H. “Bob” Shaffer, the first president of the American Counseling Association. Now in his 90s and living in Florida, Bob’s memory of the founding of ACA is sharp and his recall of events quite amazing. I was honored to spend time with Bob, and as ACA begins its 61st year, I wanted to share some of the insights that he shared with me during our time together.

In today’s world of volunteer-dependent not-for-profit organizations, we make wry references to “herding cats” and we want everybody to “be on the same page.” But for ACA’s first president, the stakes were higher and the cats larger. Plus, there was no email to expedite getting that “same page” to the key individuals who were involved in creating a unifying organization for the emerging profession of counseling.

During the interview, Shaffer related the challenges that he and his fellow visionaries faced in the late 1940s and early 1950s, leading up to his election, in 1951, as the association’s first president. He doesn’t recall herding cats so much as reassuring certain constituent groups such as territorial deans of men and women — professionals who “didn’t want to give up the autonomy and status of their own organizations,” he says.

One setting in particular lives in his mind from those earliest days. It included six guys — one of them very large — crammed into a booth in a coffee shop at the Stevens Hotel (later the Conrad Hilton and then the Chicago Hilton) ordering sandwiches, each on his own nickel. Topic of discussion: how to organize the group that would become APGA. (For a very brief time, it was the PGA, but they concluded they didn’t want to be confused with the Professional Golfers’ Association.)

“When APGA formed, it was seen as very aggressive by our critics,” Shaffer says. “Actually, we were pretty conservative guys just trying to get along. Nobody had any money then. Organizations were strapped after the war. We were talking about dues of $10 to $15 a year.”

Shaffer came to that booth at the Stevens Hotel coffee shop as assistant dean of students and director of the Veteran’s Guidance Center at Indiana University (IU). By that time, he had obtained a social science degree from DePauw, a master’s degree in teaching from Columbia University and a doctorate from New York University. In 1941, newly married, he became an assistant to the dean of the school of business at IU. However, the U.S. Army had plans for him in Hawaii and Boston — service he fulfilled before returning to IU.

By this time, Shaffer had also seen the inner workings of two not-for-profit organizations. In New York City, he interned at the Westside YMCA, giving vocational guidance to veterans. Under the original GI Bill of Rights, which Shaffer calls “one of the best pieces of legislation in the country,” veterans had to state a vocational objective before they could enroll in college. This requirement put the onus on public schools, colleges and some veterans centers to offer emotional support as well as testing. What ensued was the rapid development of the guidance field. “Veterans were scared of college,” Shaffer says. “They never planned to go, but they wanted to use that GI Bill.”

Not long after, for the princely sum of $115 a month, Shaffer became assistant to the director of personnel at the Boy Scouts of America, which sold him on the importance of volunteers.

A joint convention, with the theme “Improving Human Relations,” took place at the Los Angeles Biltmore Hotel in spring 1952 to bless the birth of APGA. In attendance were about 1,000 guidance professionals from four groups: the National Vocational Guidance Association (NVGA), the National Association of Guidance and Counselor Trainers, the Student Personnel Association for Teacher Education and the American College Personnel Association (ACPA). Shaffer was active in NVGA and ACPA, both of which he says were dominated by college professors.

Lt. Col. Gilbert Wrenn of the Bureau of Naval Personnel presided over the convention, and Shaffer credits Wrenn’s “great status” and hands-on leadership with the success of the gathering. Wrenn descended from the podium to start arranging “buzz groups” that got hundreds of people talking in groups of six, thereby fulfilling Shaffer’s personal hope that “all decisions would be openly made and openly arrived at.”

In the aftermath, Shaffer, who had served on the unification committee, was surprised at being tapped to head APGA. “The people who should have been there — Gil Wrenn, Donald Super, Clifford Erickson — were just too busy writing books. They couldn’t bother,” he says. “So they picked on old Shaffer — ‘he’s young and eager’ — and they pushed me forward. It helped that I was willing to devote an inordinate amount of time to it.”

In his second year of office, Shaffer presided over the conference in Chicago. Its theme was “Human Resources and Man Power Utilization.” Chicago was a key city for APGA, due in large part to the influence of another founding father, Daniel D. Feder, who would become president in 1960. Feder did not believe the association should hold conventions in cities that practiced racial discrimination, which ruled out many cities in the South.

As it turned out, Bob Shaffer would be the association’s first and only two-year president. Reality intruded to change the constitution when APGA leaders realized that a four-year commitment — a year as president-elect, followed by two years as president and one year as past president — was too much to ask of any professional with a full-time job. Shaffer recalls collaborating with Cliff Erickson on a wholesale adoption of the structure of the 7,000-member NVGA. They converted NVGA’s 25 or 30 committees to APGA committees and then involved some 400 volunteers in those committees to develop programs, “not to segment them but for them to contribute,” Shaffer says. “I really felt that was important.”

“Paying our bills” was Shaffer’s top concern in those early years. Being a visionary was a distant second. He tells today’s ACA leadership to think big. “I was never a big enough thinker,” he says humbly. “I worried about paying next month’s rent and getting in the school counselors.”

He looks back to the nascent days of ACA and the conflict that surrounded one question in particular: “Could we raise our dues before we were providing services? [Because] we couldn’t provide services until we had the dues to do it.”

“You can’t believe how everything was a big deal in my first term,” he continues. “Paying the bills; where are we going to meet?; how can we sign a contract for this convention when we don’t have any money?” But what the association did have, he contends, is “a group of national leaders working so hard together for a cause even beyond them.”

One unforgettable milestone was obtaining a mortgage on the association’s first building on New Hampshire Avenue in Washington, D.C. “I never felt so proud,” he recalls. “It said, ‘We are established.’”

Shaffer is also proud that he can look back now and see that he and his ACA contemporaries provided for the association’s expansion. “In those days, guidance was a very limited concept, and much of our job was to broaden the concept,” Shaffer says. “We wanted to establish a solid foundation for what we knew would be a burgeoning field. We knew that human services — in those days called the helping profession — was going to develop, and we even had visions of getting counselors from the hospitals in.” He adds that opening the doors to school counselors “brought in thousands of members immediately.”

The constant of change

In living through the Great Depression, counseling veterans returning from World War II and later witnessing the student unrest of the 1960s at IU (as well as on many other U.S. campuses), Shaffer learned to tolerate, if not always embrace, change. “We didn’t know what would be required of the helping profession in the next 15 years,” he says, “but we did know that people were going to have problems.” That is why he shared his approval of the various new divisions of ACA through the years, such as the Association for Creativity in Counseling.

Some changes Shaffer likes better than others. For instance, he says the role of technology in the continuing evolution of the counseling profession worries him a great deal because online counseling seems the opposite of a “one-on-one, face-to-face situation.” He sums up what he views as the big challenge in incorporating technology into counseling: How do we “use it effectively but not ruin the heart of counseling, which I feel is the interpersonal relationship of counselor and counselee.”

At the same time, Shaffer believes the expanding environment of professional counseling mandates that “you’ve got to think big and grab the opportunity and meet it. You can’t just protect your own office.” Bright minds and dedicated souls will often disagree on the best path forward, he adds. So, for anyone who aspires to leadership, he advises, “Take a course in conflict resolution.”

Shaffer then offers some additional advice to ACA’s leaders of today and tomorrow. “It comes back to that thing I don’t think I did well: Think big,” he says. He explains that while serving on a committee, one can get so involved in the mechanics that he or she loses focus of the subject matter. He believes committees should trade ideas and hold joint meetings.

So, what did Shaffer gain from his presidency and the trials of his role in creating a controversial new counseling organization more than 60 years ago? First, he cites the professional friends he made. “Those on the first council were dedicated and good friends,” he notes, and that was key to the psychic rewards he reaped. Second was his own personal growth as he endeavored not only to run the organization day to day — devoting much time to the mechanics of the constitution and the committees of the association — but also to provide for
its future.

Bob Shaffer believes that 60 years later, the collective vision that he and his colleagues shared has been realized. “It is being met and fulfilled, as evidenced by the strength and vitality of ACA right now,” he says. “Just look at the publications, or you go to a meeting. You can just tell it’s vital, and I think it will continue to be vital because of the way it is so responsive to various needs around the country.”

Richard Yep is the executive director and CEO of ACA. Contact him at ryep@counseling.org.