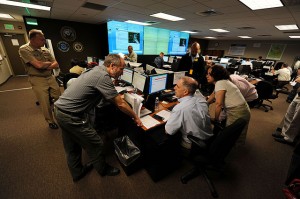 On a daily basis, we see returning active military personnel being welcomed back from overseas duty. This is well-deserved recognition for each of those soldiers. Each day, military civilian personnel given overseas assignments also return home — but minus the fanfare and welcoming committees waiting for them at the airport.

For this population, limited professional counseling services are available, and this is accompanied by a lack of current research on the topic. This may be due to individuals returning from overseas assignments being unaware of the services that may be available to them.

How can counselors help? There needs to be an effort to reach out not only to active military personnel and their families, but also to the civilian employees who are usually working side by side with their military counterparts. It is unlikely that civilian employees will reach out for counseling services; they may not be aware that these services are available to them, thinking the services are there solely for military personnel. Counselors will need to make a concerted effort to reach out to this population by meeting with military and civilian management, offering to assist these individuals with how best to address the needs of this population. Other avenues for opening up lines of communication could include via e-mail, offering relocation workshops and discussing available services via websites such as Facebook, YouTube and Linked In. The more information that is provided to these individuals, the more likely they will be successful in regaining their “back home identity.” Why is this important? Because they too were serving their country.

There is a general assumption that returning back home for civilian employees is easy because they are already familiar with the language and culture. However, repatriation is not as simple as it sounds for these individuals. The challenges inherent to living in a different cultural context for a significant period of time do not end with adapting to the host culture; they continue through the process of returning home and readjusting to what was left behind. In fact, it is often those who have adjusted most successfully abroad who have the most difficulty returning home.

Instead of employees coming home and sharing their knowledge and encouraging other high-performing employees to take the same international career track, expatriates often face a different scenario — “reverse culture shock.” They experience a feeling of being a “foreigner” in their own country. This feeling is similar to visiting a place that should be familiar to you, but isn’t; trying to interact with people you should feel comfortable with, but don’t; facing situations you should be able to handle, but can’t.

With respect to military civilian employees, the feelings of having to fend for themselves and feeling they are not as important as a military member returning home from overseas may be even more intense. Whereas the civilian employee’s tenure on a military base may be well-coordinated and the job responsibilities clearly allocated, no comparable definition of responsibilities exist for his or her transition back to civilian life. This can have a tremendous affect on professional and personal adjustment. Mr. Clarence Winkler provides an example of this situation.

Mr. Winkler had been an active duty military officer for five years. He retired from that setting and accepted employment as a civilian working for the Department of the Army for 32 consecutive years. Nine of those years were spent in Germany and 15 in Japan. His family accompanied him to both assignments. He became totally immersed in the cultures of both countries by living off base in private housing. He became fluent in German and then Japanese to thrive and perform in his jobs. Upon returning to the United States and El Paso, Texas, where his next assignment was, Mr. Winkler experienced reverse culture shock and had to gradually become reacclimated to the changing American culture he had left behind.

His reintegration into the world of work was a difficult one. He was told he was overqualified for some jobs; for other jobs, he was told he had been out of the country too long. It was devastating news to hear for a professional who was used to being in the “driver’s seat” at his previous job. In that position, he had risen to the top, in charge of hundreds of employees. He was the person who assigned job duties and expected everyone to comply. In other words, he was the “big wheel.”

He now found himself being only a spoke in the big wheel and was expected to follow assignments, many of which did not make sense to him. He also had a difficult time dealing with what others perceived as minor inconveniences (such as an office telephone not working correctly) because in his past life, things had been resolved immediately on his command.

S – sense of difference and disconnect

Counselors working with this population must assess the whole situation. They must be familiar not only with personal counseling techniques but also career counseling to help the employee regain his or her professional identity. For the population discussed in this article, counselors must also be familiar with military culture. Additionally, they must work not only with the returning military civilian employee but also his or her family, because they too are impacted by this change.

An individual action plan for the employee and family must be developed. This action plan needs to be a multipronged approach that includes both career and personal counseling. It needs to assist these individuals with their reintegration into a work setting that is different than the one they remember, as well as the changing dynamics of their personal life now that they are “back home.” For example, they may have had cleaning services during their overseas assignments that are no longer affordable back home.

The PREPS program, developed by Susanne Beier, one of the co-authors of this article, might have eased Mr. Winkler’s transition back home.

P – Prepare the employee for the upcoming culture shock of re-entry to his or her native country. Introduce the employee to a fellow repatriate who can serve as a mentor or guide as the employee gets ready for repatriation.

R – Review the changing job market and societal changes that have occurred during the military civilian employee’s absence. For example, it is no longer the “norm” to include a photo with a résumé or to discuss health as was the case years ago.

E – Engage the family in the re-enculturation process. Provide opportunities for family members to express how they feel and assist them with coping with these feelings.

P – Provide financial counseling as it relates to what the military civilian employee can and cannot afford upon returning home (for example, household help, buying a new home, best neighborhoods, etc.).

S – Support. Ongoing support is essential, not only upon the employee’s immediate return to his or her native country, but for the first year. That support needs to include helping these individuals adjust to being “a cog in the wheel” instead of the high-ranking employee they might have been before. Special focus needs to also be placed on managing employees in the United States versus overseas, where the employee may have been part of a strict regimen and hierarchy. A career or employment counselor and life coach could provide this support.

Repatriation is not simple. It can take as long as 18 months for an expatriate to adjust and reintegrate after an international assignment. Adjustment issues affect employees and their families, both personally and professionally. Understanding the problems they may encounter upon reintegration is the key to a successful repatriation.

Susanne Beier is a licensed professional counselor, a diplomat in clinical forensic counseling and a diplomat-senior disability analyst. She has 10 years of teaching and educational administration experience at the high school level, as well as 15 years of clinical counseling, and Fortune 500 industry experience. She also has more than 10 years’ experience teaching at the undergraduate, graduate and doctoral levels at the University of Phoenix (online and on-ground campuses). She has been featured in NEW WOMAN, Working Woman, SELF and Cosmopolitan magazines for her work with corporate relocation clients. Contact her at bsusanne847@gmail.com.

John Sienrukos retired after a career with the Department of the Army as an officer and civilian employee. His last assignment was as the assistant commandant, U.S. Army Sergeants Major Academy, Fort Bliss, Texas. He has more than 10 years’ experience teaching at the undergraduate, graduate and doctoral levels at the University of Phoenix, Webster University and Excelsior College. Contact him at jsdm46@excite.com.