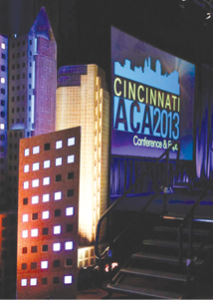 The 3,494 individuals who attended the American Counseling Association’s 2013 Conference & Expo in March came to Cincinnati from across the United States and the world to learn the latest information about counseling practice and to share their own knowledge, all while getting to know one another.

Attendees chose from among 280 education sessions, 206 poster sessions and 38 preconference learning institutes. In addition, the newly launched Client-Focused Research Series featured nine 30-minute presentations that shed light on research conducted by ACA members that truly benefits clients and focuses on improving the services that professional counselors provide to them.

While the ACA Conference in Cincinnati was undoubtedly the place for counselors to be to enhance their professional development and widen their personal and professional networks, the conference was also the site of several happenings that will affect the larger body of ACA members, regardless of whether they attended the conference, and the counseling profession as a whole.

In a disappointing end to a seven-year process, the delegates to the 20/20: A Vision for the Future of Counseling initiative were unable to reach consensus on education requirements for counselor licensure portability (see separate article on page 66). Although the delegates reached consensus on a common licensure title at the 2012 ACA Conference in San Francisco and were also able to arrive at consensus for a common counselor scope of practice in Cincinnati, agreeing to standard education requirements was viewed as the linchpin element to eventually making counselor licensure portability a reality.

On a brighter note, plenty of good news came out of the ACA Conference in Cincinnati as well. During its meeting March 19-20, the ACA Governing Council approved the Association for Child and Adolescent Counseling (ACAC) as the 20th division of ACA, making it the first division added to ACA’s ranks since the Association for Creativity in Counseling in 2005. ACAC has been operating as an organizational affiliate of ACA since the fall of 2010.

In addition, the ACA Governing Council approved two new interest networks — the Sexual Wellness in Counseling Interest Network and the Interest Network for Integrated Care. There are now 18 interest networks operating in ACA, and each is free to join for counselors who want to come together with others to explore areas of common concern or interest (email Holly Clubb at hclubb@counseling.org  for more information).

It was also fitting that the official unveiling of the new ACA website (counseling.org) took place at this year’s conference. Last year, the head designer for the firm helming the redesign spent three hours at the ACA Conference in San Francisco listening to members discuss the now-former website: what worked, what didn’t meet expectations and what they wanted to see in a new website. The conversation that day sparked months of meetings, wireframes, user tests and revisions, which ultimately led to a “soft launch” of the new website in February.

The next phase of the redesign will take place this summer when the ACA Online Community page is rolled out.

Technology will also take center stage with the 2014 ACA Code of Ethics, the first draft of which was officially announced at the ACA Conference at a town hall meeting with the Ethics Revision Task Force. This open discussion between conference attendees and task force members was one of special importance, not only because this marks the first revision of the ACA Code of Ethics since 2005, but because this version will for the first time set a direction for the use of social media and other technology by counselors.

“The 2005 Code of Ethics had a subsection that addressed the emerging issue of online counseling,” says Perry Francis, chair of the ACA Ethics Revision Task Force Committee, “but social media … was not even in use as a medium for providing services [at that time]. Today, counselors have websites, Facebook pages and can provide services via virtual reality. Our current code does not adequately address these mediums. The revision will contain a separate section that directly addresses the many issues that counselors need to consider when using these mediums for providing services.”

Francis says the participants in the town hall meeting at the conference offered excellent feedback on the first draft of the revision, while also challenging the task force to look again at issues paramount to many counselors.

“[The meeting] highlighted what a diverse body of counselors work in our profession,” he says. “I saw this in the many and varied reactions we had to specific sections of the revision. For example, the revision is identifying some of the professional values of counseling and addressing them throughout the Code of Ethics. How these values are applied is a matter of some opinion. The task force will now revisit those areas given the comments made and the other feedback we receive via the ACA website.”

ACA members, counseling organizations and state counselor licensure boards are invited to review the draft and submit comments through May 30. The draft can be accessed here. The final version of the 2014 ACA Code of Ethics is scheduled to be unveiled at next year’s ACA Conference & Expo in Honolulu.

In between all of the educational offerings, networking opportunities and other assorted happenings, attendees were also inspired and invigorated by two keynote addresses from Ashley Judd, who spoke of her personal journey of recovery and shared her gratitude for counselors, and Allen Ivey and Mary Bradford Ivey, who educated attendees about the intersection of neuroscience and counseling.

The Iveys, who have been researching neuroscience and its implications for the counseling profession since the 1970s, aimed to energize attendees with the knowledge that the brain is constantly changing and that counselors have the ability to effect and encourage that change positively with clients.

The Iveys spoke about research which shows that during interactions, there are marked changes to the client’s brain as well as to the brain of the counselor.

“In high-peak moments in counseling, your brain is in synchronicity with your client’s [brain],” Allen Ivey told the crowd, noting that every counseling conversation has a marked impact on a client’s neurotransmitters.

The Iveys added that studies have found that the positive counseling approach achieves the same goal as medications to treat depression, such as Prozac and Lexapro, because these interactions produce serotonin in
the brain.

“The brain is amazing,” Allen Ivey said. “Counseling is amazing.”

Although counselors themselves clearly understand the positive impact they can have on clients, he told the audience it is important to have data handy to back those claims up. “I think we ignore neuroscience at our peril,” he said.

Judd has experienced firsthand the impact a counselor can have on a person’s life. The actress, humanitarian and mental health advocate checked into the intensive inpatient treatment program at Shades of Hope, an addictions center in Buffalo Gap, Texas, seven years ago to confront a long-standing struggle with depression and codependency.

She told attendees she is just as grateful now for the role that counselors played in her recovery as she was back then. “This [recovery] would not have been possible if someone like you hadn’t been able to recognize unresolved trauma and a codependent personality,” she said.

During her keynote, Judd discussed her journey from a lonely childhood to a troubled adulthood. It wasn’t until she visited her sister, country singer Wynonna Judd, who was being treated for an eating disorder at Shades of Hope, that counselors suggested Ashley check herself into the facility for 42 days.

Judd told attendees she is especially vocal about her depression and her recovery from it is because “the stigma is still there [in society], and it’s silly.”

Judd recalled feeling as though something was “grievously wrong” with her as far back as 1996 but, being fearful that someone would find out she had a mental health issue, she waited nine years to seek help.

She credited her personal counselor, Ted, for helping her find the strength to make it through the treatment program at Shades of Hope even when she was having second thoughts.

“He told me, ‘I have wanted this for you since the day I met you,’” Judd recalled. “He was ecstatic. … I wasn’t necessarily happy all the time [during treatment], but I believed that he believed [in me], and I could hang onto that during the next six weeks.”

Letters to the editor: ct@counseling.org.