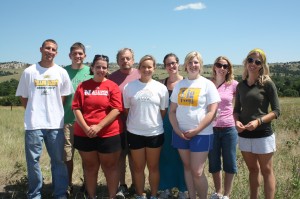 The lives and worldviews of more than 100 Nebraskan youths and counseling students have been enriched thanks to Bruce Dickinson, who uses his passion for Native American culture to connect with members of the Lakota tribe.

Dickinson, a licensed professional counselor, has been taking high school students and graduate counseling students on cultural immersion trips to the Pine Ridge Reservation in South Dakota for more than a decade to help them understand what life is like on a reservation.

“I became interested in Native Americans as a history and English major in college,” explains Dickinson, a member of the American Counseling Association and the Nebraska Counseling Association. “I was also interested in archeology, so the indigenous populations in the Americas [were always] of high interest to me. Then I learned that my great-great-grandmother on my mother’s side was a full-blood Cherokee.”

Dickinson was able to dovetail this interest with his profession after meeting school counselor Dallas Chief Eagle, a member of the Lakota Nation. The two met in the early 1980s when ACA’s Midwest Region held its Fall Leadership Conference in Rapid City, S.D., and the South Dakota Counseling Association had its then-active division of Native American counselors host the conference.

The two became fast friends. Their relationship further fanned Dickinson’s interest in Native American culture and subsequently exerted an impact on his view of counseling.

“I have always attended multicultural workshops and attempted to look at things from a multicultural perspective,” he says. “This relationship with the Lakota has helped me realize that my counselor persona is constantly evolving, and that is essential if I am to remain a competent therapist. The Lakota have also reinforced my belief that counseling is all about relationships, listening for understanding, emitting a feeling of unconditional positive regard and conveying a belief that the client has the ability to help himself. I have also learned that counseling is about the relationship and not about the diagnosis.”

Dickinson and Chief Eagle have even participated in a Hunkapi, or “making of a relative” ceremony, so the two are now considered brothers in the eyes of the Lakota Nation.

While Dickinson’s life has been forever changed by his relationship with the Lakota and Chief Eagle, he wanted to build bridges between the community of Seward, Neb., where he has lived for more than 30 years, and the Lakota as well.

His first opportunity came in 1992, when Dickinson’s school district established a separate middle school and officials decided to begin the year with a program that would help incoming sixth-graders get to know each other. They decided to go with an outdoor education program with “Native American Awareness” as the theme.

“I was asked if I could try to get my friend, Dallas Chief Eagle, to come to the camp,” says Dickinson, who was a school counselor at the time. “The Nebraska Humanities Council awarded us a grant to pay his expenses that first year. It [has since become] so popular that a local bank annually pays for Dallas to attend the outdoor education camp.”

Dickinson was happy to give the students the opportunity to learn about Native American culture. But still, he wanted to do more.

Then, in 2004, he started to take high school-age youths from a local church on trips to Pine Ridge. The trips have taken place biennially ever since.

Participants go on a six-day “immersion program” through the nonprofit Re-Member. During their time on the reservation, they perform community service projects such as building bunk beds and skirt trailers, constructing and placing outhouses, performing roofing projects and building wheelchair ramps for the Lakota to use. In addition, they visit the mass gravesite for those lost in the Wounded Knee Massacre, Badlands National Park and other cultural sites important to the Lakota. Each morning, a Wisdom of the Elders presentation takes place, focusing on the history of the Lakota. At night, other presentations focus on Lakota culture.

Dickinson notices changes in many of the students’ mindsets upon returning home.

“They initially have difficulty with the poverty on the reservation, [such as the] living conditions and lack of good roads, and have trouble when they learn about the school dropout rate and unemployment [within the reservation],” Dickinson says. “But by the end of the week, most are determined to go home and make sure others understand the extent of the poverty and injustices. They have been touched by the relationships they have made and moved by the spirituality of the Lakota people.”

Several students have informed Dickinson that the trip was a life-changing experience and have returned a second time.

At the ACA Conference in Kansas City, Mo., in 2004, Dickinson introduced Chief Eagle to David Hof, a professor at the University of Nebraska Kearney (UNK).

“Over the next couple of years, David and I began to discuss what I was experiencing on the Pine Ridge Reservation and the effect it was having on me and the high school students,” Dickinson says. “David had grown up in Custer, S.D., and was very interested in these experiences.”

“We believed that this program could reinforce the need for counselors to identify the two to three major subcultures within their community of employment,” Dickinson says. “Once identified, they must acquire enough understanding of that culture to diminish the possibility of undermining the relationship before trust has been established. Once they are able to step out of their comfort zone, they develop a connectedness based on compassion and mutual growth.”

In 2007, Dickinson put together a rough outline of the course for Hof, which was then approved. Graduate students in the counselor training program have gone annually to Pine Ridge since the summer of 2008.

The purpose is to teach counseling students how to communicate in a culturally appropriate manner by stepping out of their comfort zones, Dickinson says.

“Once this occurs, shared experiences should bring about a connectedness based on compassion and mutual growth,” he continues. “This is a vital lesson when trying to connect with any client.”

The students must attend a class before the trip and discuss a list of handouts covering topics such as cultural differences, data about Pine Ridge, the Seven Sacred Ceremonies of the Lakota and the Wounded Knee Massacre. They then spend three to four days on Chief Eagle’s farm on the reservation.

The students are not always prepared for what they experience.

“They are amazed by the Lakota people’s willingness to explain elements of their spirituality and invite them to participate in several family activities,” Dickinson says. “In our evening discussions, students indicated how this hands-on experience reinforced the importance of relationship building. Several indicated that they felt every counseling graduate student should have a similar experience. Several of the students have participated on more than one occasion.”

Some participants have even presented poster sessions about their experiences at ACA Conferences & Expos.

In general, Dickinson does not believe that many counselors receive the necessary training to be culturally competent.

“ACA and the Association for Multicultural Counseling and Development in 1992 jointly published in their journals a set of cross-cultural competencies,” he says. “However, I question whether graduate programs at the master’s-degree level are infusing these competencies throughout the curriculum. “

Until this happens, he believes it is important for state counseling branches and ACA to provide multicultural workshops to continue enhancing counselors’ skills in this area.

“In order to truly become culturally competent within another culture than your own,” he says, “you must go experience that culture.”