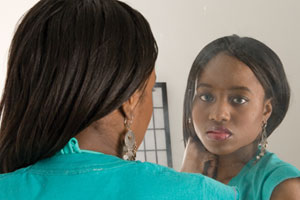 Imagine two women standing in front of a mirror. The first one has the following thoughts: “I can’t stand the way I look. I’m so fat.” She feels anxious, insecure and depressed.

The other woman says to herself, “I’ve gained a few pounds, but it’s not the end of the world. I can relax and start eating better next week.” She feels calm and accepting of herself.

The scenario is the same for both women, but their interpretation of it is significantly different because of one thing — their self-talk.

What we say to ourselves has a powerful impact on our emotional state. That’s why teaching clients to notice their self-talk is such an important part of therapy. Today more than ever, attachment- and mindfulness-based therapies are helping clients experience emotional healing. Drawing from mindfulness therapy, I coined the term “the art of noticing.”

Noticing helps clients pay attention to their internal monologues and understand how their negative inferences affect their emotional states. Noticing is particularly helpful when working with clients who experience anxiety, depression and eating disorders because these clients are especially prone to negative self-talk. Because self-talk is so automatic, it is easy to dismiss its effect on clients’ moods and belief systems, but noticing is a first step in helping clients to:

According to Edmund Bourne, a clinical psychologist who has written best-selling anxiety workbooks, each of us has a personality subtype that contributes to our mental health distress. This negative “voice” falls into the following four categories:

Each of these subtypes perpetuates negative self-talk. Our job as counselors is to help clients recognize and change those negative internal monologues by replacing them with positive counterstatements.

An effective way to begin this practice is to help clients identify which voice(s) fits them. Identifying the self-defeating statements of each voice helps clients to notice these statements and train themselves in the use of thought-stopping techniques and thought replacement.

Another tool therapists use to help clients with awareness is the Dysfunctional Thought Record, developed by Aaron Beck. The thought record requires clients to list negative self-talk (thoughts), then refute that self-talk by considering and listing rational counterstatements.

In my practice, I have incorporated several additional components to the thought record to help clients facilitate change. My goal is to help them focus not only on their thoughts but also the beliefs that are driving them. Linking their current beliefs to where the original hurt or attachment wound occurred is key to healing. I include the following topics in the thought record:

Situation causing distress: This is the presenting problem.

Feelings about the situation: Clients record their emotions and rate their intensity.

Beliefs: List clients’ beliefs about self, God and others.

Attachment wound: This is the original hurt from the past that helped strengthen the client’s present core belief. An example might be a client who was abandoned by her father.

Coping strategies the client developed: I explore with clients what defense strategies or coping skills they have used to deal with their pain. Examples include emotional withdrawal, people pleasing, performance, “try harder” strategies, avoiding conflict, codependency and anger.

Putting it into practice: A case study

Debbie came to see me because her husband had an affair. She felt anger, hurt and anxiety. Her current belief, “I can’t trust others,” first took root in her past as a result of her father’s abandonment. Her husband’s infidelity further strengthened Debbie’s core belief that others can’t be trusted. Her father’s betrayal was the original hurt that established this belief.

This is where destructive vows come in. Vows are promises we make in our hearts to shield us from pain and rejection. Vows made early in life can live on in our actions, sometimes for decades, until something or someone comes along to prove them unnecessary. Debbie made a vow she would never allow someone to hurt her like her father had. When she met her husband, she took a risk and opened her heart, only to have it shattered again.

Debbie attached a fear (“Others will abandon me because of my flaws”) onto her belief (“I can’t trust others”). As we went through the steps on the dysfunctional thought record, she started to see the connection between the past hurt with her father, her fear and her current belief that she couldn’t trust others.

Finally, I wanted to help Debbie see what coping strategies she had developed to protect herself from the pain and rejection of the early attachment wound. These strategies, which developed out of her belief that she couldn’t trust others and her fear that others would abandon her because of her flaws, included people pleasing, trying harder, performing for acceptance, emotional withdrawal, avoidance and anger.

For the last part of the thought record, I had Debbie consider her cognitive distortions. I previously had spent a session teaching Debbie about cognitive distortions and showing her the connection between distorted thinking and mood states. She identified several cognitive distortions that she was prone to make consistently, and she immediately recognized the downward spiral her mood took when she engaged in this thinking.

Thought replacement and the use of positive counterstatements were the final pieces we implemented in Debbie’s thought record. Together, we developed a list of her beliefs and chose appropriate counterstatements for her to consider. Debbie now had some concrete tools to move forward.

When using counterstatements, it is important that clients have some measure of belief in their veracity. As a Christian counselor, I help clients develop a God-centered focus by rooting their counterstatements in their faith. This allows them the opportunity to connect with God on a personal level for healing. Debbie chose to memorize a Bible verse, “God will never leave you or forsake you,” to refute her negative belief that she would always be abandoned. This also helped to ease her anxiety.

Whatever treatment modality the counselor chooses, the goal is the same — to help clients become aware of their negative attributions and the beliefs that are driving them. Without addressing core belief systems, clients’ negative attributions will persist and continue to have a negative impact on their life’s trajectory.

Rita A. Schulte is a licensed professional counselor and host of the podcast Heartline. She has a private counseling practice where she specializes in the treatment of eating disorders, anxiety and depressive disorders, and grief and loss issues. Her book Shattered: Moving Beyond Broken Dreams will be released by Leafwood Publishers in September. Contact her at ritaundergrace@cox.net.