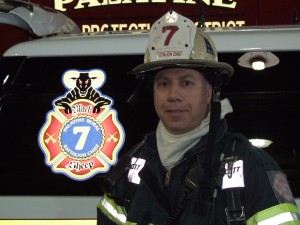 When running into burning buildings is part of your job description, it’s understandable that your profession might have a substantial impact on your emotional and mental well-being.

But for reasons Jeff Dill can’t explain, inadequate focus has been placed on the mental health care of professional and volunteer firefighters. “In the fire service, we can teach you how to use ropes and ladders, we can teach you search-and-rescue [techniques], we can even teach you how to exit out of a window head first,” he says. “But there has not been a lot of training on [the fact that] you may also see some depression or PTSD or suicidal ideation.” Dill would know. He is both a licensed professional counselor and a professional firefighter.

In fact, Dill has taken it upon himself to bridge the gap between counselors and firefighters by creating Counseling Services for Firefighters (CSFF) and the nonprofit Firefighter Behavioral Health Alliance (FBHA).

CSFF, which Dill founded in 2009 after receiving his master’s in counseling, offers behavioral health support to firefighters and provides workshops to educate counselors on the emotional challenges and culture of firefighters. The following year, Dill founded FBHA, an organization focused on educating firefighters about suicide prevention and awareness.

Dill, a member of the American Counseling Association and the Illinois Counseling Association, has been a career firefighter since 1995. He is currently a captain at the Palatine Rural Fire Protection District in Inverness, Ill. But it was Hurricane Katrina in 2005 that made him realize he wanted to do something tangible to help his fellow firefighters.

Katrina, one of the five deadliest hurricanes in U.S. history, was blamed for the deaths of more than 1,800 people. It also left a lasting mark on rescue personnel who tried to help in the aftermath of the storm.

“I spoke to a lot of firefighters who went down there to help, and they had to do a lot of horrific things, like pulling dead bodies out of water,” Dill says. “They really wanted someone to talk to about what they went though.”

Unfortunately, he says, many of the firefighters who returned felt a disconnect between themselves and the mental health professionals they turned to for help. Many firefighters didn’t think the therapists truly recognized what they had experienced or understood their culture, so they stopped seeking the help they needed.

So, Dill began to consider becoming a counselor, thinking it was a way to give back to the profession he loved.

Firefighters are faced with emotional needs unique to their occupation, Dill says. The percentage of firefighters struggling with career-related stress is marked as “very high.” A 1995 study revealed that 16.5 percent of firefighters had diagnosable PTSD, which was approximately 1 percent higher than PTSD rates among Vietnam veterans. In comparison, the rate was 1 to 3 percent in the general population.

Research from the nonprofit Sweeney Alliance reports that many firefighters don’t feel their families understand the magnitude of their duties or the emotional toll their job takes on a daily basis. This can result in higher rates of divorce, addiction to alcohol, drugs or gambling, and suicide.

“There are a lot of counselors who don’t understand our culture,” Dill explains. “And because of our culture, things are internalized, [so firefighters] may not have had anywhere to turn. There is the mindset of, ‘Let’s not ask for help. I don’t want anyone on my company to know I have these signs of weakness because I don’t want my company to think I can’t handle these things.’”

“When I was in school getting my master’s degree,” Dill continues, “I realized my professors and [fellow] students had no idea what I was talking about, when I thought I was speaking about Firefighter 101.”

Not long after CSFF began gaining traction, Dill started getting phone calls from people all over the world asking whether he had statistics on firefighter suicides. “I didn’t know we had a problem [obtaining] them” until that point, Dill recalls.

Dill began collecting reports through a confidential reporting system in late 2010. “After much research and effort, I realized this was a much larger issue than I had originally thought,” he says.

That is when Dill decided to expand his reach and founded FBHA, through which he now collects this data. He has been tracking firefighter suicide data internationally since the beginning of the year.

Dill says FBHA is the only organization he knows that collects data on firefighter suicides nationally as well as globally. The most up-to-date numbers can be found on the organization’s website at ffbha.org. As of June 17, there have been 348 documented in the United States, with the earliest dating back to 1880. The numbers include both active and retired firefighters who died by suicide. Dill has been actively requesting that fire departments across the United States report suicides from their department’s history to the present. No names are used unless families give permission.

This year, FBHA has also launched a scholarship program that will provide higher education financial assistance to surviving children and spouses of firefighters who died by suicide.

The five scholarships, ranging from $500-$1,000, will be determined by the amount of funding donated to the program. The scholarships are named after U.S. firefighters who took their own lives and whose families Dill has met.

“We’re very excited that we can offer something back to the children and families of firefighter suicide,” he says. “I think it’s important that we don’t forget about the family members because after a suicide, there’s not much to offer them.”

Dill notes that when a firefighter dies by suicide, there is no state or federal compensation for his or her family.

In the future, Dill would like FBHA to sponsor a weekend retreat for spouses and children of firefighters who have died by suicide. He wants them to meet so “they can learn that they’re not alone out there in the world.”

Although Dill thinks there is a long way to go in terms of society recognizing the mental health needs of firefighters, he says “the tide is definitely turning.” He notes he has also witnessed more of a vested interest within the counseling community to help this unique client population.

He recommends that counselors who are interested in taking on firefighters as clients adopt a proactive approach. “Take some time to go up and introduce yourself to the department. Go out for rides.” Dill says local fire departments are an important resource for counselors and can help counselors better understand the culture.

It is also important that counselors receive specialized training to learn about firefighter culture and how best to help, Dill says.

Send letters to the editor to CT@counseling.org