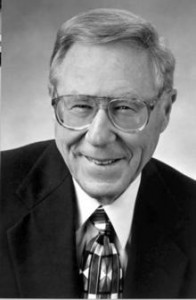 William Glasser, founder of Reality Therapy and Choice Therapy, passed away Aug. 23 at his home in Los Angeles in the company of his wife, Carleen. According to The William Glasser Institute his death was a “massive shock” despite the fact that he had been experiencing declining health.

Glasser’s books, which include Reality Therapy, Reality Therapy in Action, Counseling With Choice Theory and Positive Addiction were groundbreaking within the counseling field. Glasser’s approaches, which focus on responsibility and choices, have been applied to psychotherapy, health, education and relationships. In 2004 the American Counseling Association named Glasser, a frequent presenter at ACA conferences, a “Living Legend.” He told Counseling Today he was first in school to become a clinical psychologist but was advised by a professor to become a psychiatrist.

“I am now a counselor because all I have ever done is counsel, write books and teach,” Glasser said, “I have never prescribed a psychiatric drug, and I am against all brain drugs. So I am not typical of my profession  and feel very comfortable among counselors.”