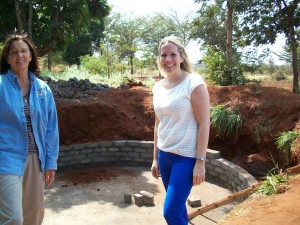 Flamez (right) and Green stand by the beginnings of the well being constructed for the residents of Mtimhoo, Tanzania.

Flamez first visited Tanzania during the summer of 2012, spending the six months before she left raising $9,000 for hospitals, orphanages and schools in Moshi. Once there, she co-presented a mental health training program to teachers and priests, and donated the $9,000 she had raised prior to her trip to Rainbow Orphanage (an orphanage for children from birth to age 5), Upendo Orphanage Center (which houses older orphans), two schools, Kibosho Hospital and the psychiatric wing of Mawenzi Regional Hospital. The recipient of ACA’s Gilbert and Kathleen Wrenn Award for a Humanitarian and Caring Person, Flamez also donated her $1,000 monetary prize to St. Francis, a primary school for students with special needs.

“After visiting Tanzania the first time, I knew I would return every year if possible,” says Flamez, who is the ACA Governing Council representative for the International Association of Marriage and Family Counselors, president-elect of the Association for Humanistic Counseling and chair of the ACA Publications Committee. “I experienced an almost indescribable connection to the people, as well as a spiritual journey. Not only did we establish a working relationship and collaboration where we were all learning from each other, but we formed friendships that continued to grow throughout the year.”

This year, due to the birth of her son, Braeden, Flamez spent two weeks in Tanzania instead of a month. She spent her time following up on the projects she and Judith Green, a fellow counseling professor at Walden University, implemented the previous year. They also began executing their projects for this year and collaborated with leaders in Tanzanian communities to identify projects for 2014.

“Originally, [Green] went because she was teaching the mental health facilitator training [in Tanzanian communities],” Flamez says. “When she asked me to go, I asked her if she ever thought about incorporating social change projects. This is how [the projects] began to develop.”

This year, the two provided water to the village of Mtimhoo and began the process of building the town a well and cistern, which will be completed in November.

“Mtimhoo had experienced an extreme drought that not only destroyed their crops and livestock, but also left many children and families to starve,” Flamez explains.

“Dr. Green and I received a letter from Father Aloyce [of Mtimhoo Parish] in November describing the harsh conditions of the drought,” she recalls. “We were aware that livestock were dying, and so children and families were starving.”

However, when they arrived this past July and visited the parish, Flamez was “completely taken aback at the extent of the damage. The Western world is often sheltered from drought of such severity. To see firsthand how people have been starving and the extent of the damage was overwhelming. All of the crops for miles and miles were dead. The place that once had more than 20 large pigs was completely empty because all the pigs had died from the drought. I noticed this small plot of grass, probably 2 feet by 2 feet raised on a platform. This was the only source of vegetation.”

Mthimhoo Parish is currently the community’s only water source.

“As children started their long walk home, they came by the parish with water bottles asking if they could take water home,” Flamez recalls. “They were beyond grateful just to have a sip or a cup of water. Other people in the village walked 5-10 miles to come and take water.”

Yet, she was amazed by the village’s resilience.

“They came together in the village and community to support and help each other,” Flamez says. “The people of Mtimhoo formed a collectivistic culture rather than [an] individual [one]. For example, people in the village shared their crops and livestock with those whose crops died or animals died first.”

The second project that Flamez and Green worked on was building a secondary school for St. Francis.

The students that St. Francis serves — children who are blind, hearing impaired, cognitively impaired or albino — are unable to have their educational needs met in other religiously affiliated schools or in government-funded schools.

“In Tanzania, the government does not provide assistance to anyone diagnosed with a mental health disorder or disability,” Flamez explains. “These children are generally looked down on by much of the Tanzanian community and are sometimes the object of hostility.”

Currently, there is no secondary school for children with disabilities in Tanzania.

When they visited St. Francis last year, Flamez noticed there were only two stuffed animals in the dorm rooms, and both were worn out.

“One of the nuns explained to me that during the night, many of the children cry because they miss their parents or are scared,” Flamez says. “The stuffed animals are used to comfort the children and are passed around throughout the night between the children. She explained that this is often difficult because there are only two animals to be shared among all the children.”

So, this year, counselors, counseling students at Walden University and parents at the elementary school that Flamez’s daughter attends came together and donated 250 stuffed animals to the school’s dorms.

“During our stay, when the students of St. Francis were in class, Dr. Green and I went into the dorm sleeping rooms and placed a brand new stuffed animal on every child’s bed,” Flamez says. “The students knew we were bringing something into their sleeping rooms because we lugged big suitcases, but they had no idea what was in the suitcases.  I will never forget how excited the children were when they ran into the sleeping rooms to receive their first stuffed animal. They ran so fast to their beds, screamed so loud, and jumped up and down full of excitement. They all hugged their stuffed animals and were showing them to all their friends.”

Flamez and Green also donated shoes, 100 outfits and enough baby formula to last a year to Upendo Orphanage, as well as purchased psychotropic medications for the patients in the psychiatric wing at Mawenzi Regional Hospital.

The experience provided Flamez with a deeper understanding of how the lack of government infrastructure affects mental health services in Tanzania.

“Currently, there are no mental health counseling services in Tanzania,” she says. “People often travel from all over the country to see Dr. Edward Ringo [head of the psychiatric wing at Mawenzi], who is one of the only psychiatrists in the region. Although he has extensive training in diagnosing, the DSM and treatment, he shared the challenges he faces due to the fact that there are no follow-up services [such as] mental health counseling [and] social services for his patients.”

Ringo shared a heart-wrenching story about a woman he treated who, because the country is lacking social services to support the mentally ill, “just wondered into the streets after discharge,” Flamez says. “The hospital does not receive governmental support to provide medications, and many people cannot afford to pay for prescriptions. There is no support for a laboratory that would test the medication levels in Dr. Ringo’s patients, so even his medication choices are very limited.”

“There are over 100 different tribes,” Flamez says, “and it is not uncommon for someone to show up and the staff to be unfamiliar with the language. therefore, there is no way to access past psychosocial history.”

Next year, Flamez and Green will focus on providing medicine for a dispensary in Keni that serves more than 12,000 people.

“Many people seek medical attention — due to illnesses, births, malaria and HIV testing, for example — from dispensaries because they do not have any means to get to a hospital or to afford treatment at a hospital,” Flamez says.

In addition, Flamez and Green will be raising money to provide a year’s supply of formula to Upendo Orphanage, a salary for a kindergarten teacher who is currently working for free and a year’s supply of psychotropic medication for the psychiatric wing at the regional hospital.

Flamez and Green are also partnering with the Catholic Diocese of Moshi to identify local schools, churches and hospitals in need of mental health facilitator training, which will be offered in 2014.

Flamez believes it is important for counselors to take an active interest in social justice and to nurture their multicultural competence as well as the principles of program evaluation, leadership and consultation.

“I encourage people to collaborate with community organizations to promote trust as well as to provide culturally relevant services,” she says. “Part of this process involves recognizing and confronting one’s cultural biases and behaviors. I think it is also important to continue to develop advocacy skills in social change and to cultivate an awareness of social injustices that have global implications.”

She urges counselors to get involved in ACA divisions such as Counselors for Social Justice and the Association for Multicultural Counseling and Development because, she says, they are a “great ways to connect with other professionals who have a similar dedication to social change. In addition, such involvement can provide mentorship opportunities from individuals in the counseling profession who are creating and applying ideas, strategies and actions to promote worth, dignity and societal development.”

Whether locally or globally, one of the best ways to develop a deeper understanding of a culture is to experience it fully, Flamez says.

“Immersion in [a] culture through community service not only provides exposure to the concerns of the individuals, but also allows one to gain insight into the accomplishments, contributions and uniqueness of different cultures,” she says. “One of my favorite professors once shared that those who visit other cultures will likely learn more from visiting than those with whom they visited [will learn]. I believe mental health has global solutions. For example, mindfulness methods, which originated in Asian cultures and have been adapted to more Western applications, have been enormously successful.”

Flamez says there is still a need for counselors to become better trained to understand social justice issues from a global perspective, as well as how mental health concerns can be manifested in populations outside of the United States.

“I think there is a need for counselor education programs to prepare students to function globally, as well as prepare students and faculty for meeting the challenges of life in a global community,” she says. “As I have shared my experience, I have met passionate individuals who are eager to become involved in community service, but their questions remain: ‘I just do not know how to start,’ or ‘How do I become involved?’ These questions are also a reminder to me that there is a need for continued mentorship. As the counseling profession grows and develops, I believe there will be more of an emphasis on the role of community service in the curricula of counselor education programs.”

Flamez hopes her experiences will “encourage others to think outside of the box, push the envelope in terms of one’s comfort zone and enter social change and community service through a circle of observation, discovery, reflection and equality.”

Keeping with that mindset, Flamez will travel to Turkey on Sept. 4 as a delegate for the International Association of Marriage and Family Counselors, a division of ACA. While there, she will meet with Turkish colleagues to discuss issues pertaining to the training of family counseling.

She knows that financial constraints or school responsibilities might get in the way of many counselors and counseling students being able to travel internationally, but she wants them to “take away that social change can happen locally and globally. There were many people who helped plan and organize local projects to help with the success globally. Social change is a dynamic and common mutual process, and people can create change on a daily basis.”

For more information on Flamez’s trip or to find out how to get involved in 2014 projects, visit brandeflamez.com.