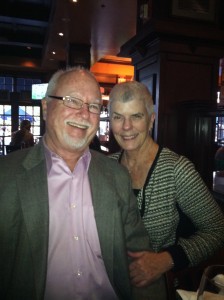 American Counseling Association member Diana Hulse and former police officer Peter McDermott are once again joining forces to help members of the law enforcement community enhance their interpersonal skills. Hulse and McDermott are in the midst of completing a handbook designed for police instructors called The Ultimate Cop in the 21st Century.

Hulse, a professor and chair of the Counselor Education Department at Fairfield University, and McDermott, a retired captain from the West Hartford and Windsor, Conn., police departments and a retired instructor from the Connecticut Police Academy, have been collaborating together on the topic of skills training for the past three years. Although they have published articles in the FBI Law Enforcement Bulletin (here and here) as well as in Counseling Today, this will be the duo’s first book.

“This handbook builds on the articles [we wrote], providing resources and tools for police instructors and supervisors to use in teaching and evaluating interpersonal skills, skills for giving feedback and skills for leadership tasks,” Hulse explains.

McDermott, who trained police recruits and officers from 1985 until 2009, recalls how their collaboration began. “After I retired and started talking with Diana, I became aware that the procedures used for teaching and evaluating interpersonal skills in counselor education programs could be adapted to training and evaluating interpersonal skills in police academies.”

Coming from a police officer’s perspective, McDermott believes The Ultimate Cop in the 21st Century will be useful for police officers and that its content “demonstrates how to take best practices from counselor education programs and apply them to training methods that are accessible and useful to law enforcement.”

Having spent nearly 50 years in law enforcement, McDermott says, “Police officers have always needed to be good with people, and they have suffered inordinately if they haven’t been. Police, in all of their tasks, require a mastery of interpersonal skills to be successful.”

But unfortunately for police officers, McDermott says that “just the appearance of red lights and a uniform causes conflict.” That heightens the importance, he says, of officers being able to comfortably and confidently interact with people.

McDermott stresses the importance of being able to talk to people from any multicultural background and in any situation in order to glean information and keep communities safe.

In addition to their writing projects, Hulse and McDermott have provided training and workshops for first-line supervisors at the Connecticut Police Academy in Meriden, Conn.

“In these workshops, we include graduates and current students from [Fairfield University’s] school counseling and clinical mental health counseling programs,” Hulse says. “They function as group facilitators for structured discussions around the topic of corrective feedback in police supervision.”

In Hulse’s experience, she says that first-line supervisors seem to engage with the idea of working on their interpersonal skills, but they also often feel that they don’t have time for it.

Hulse says that she and McDermott hope that The Ultimate Cop in the 21st Century will help officers “embrace the talk factor more completely, so this won’t be seen as an add-on but rather as a foundational core for effective police work.”

The goal is to eventually change the culture within the law enforcement community and infuse interpersonal skill training into police academies. “If you start with recruits and teach them the foundations of interpersonal communication, they can take those skills along with them throughout their careers,” Hulse explains. “In addition, officers also need skills for working effectively with groups of individuals in their organizations and communities. If a goal in these groups is to hear from everyone and to gain information, officers need skills for understanding group dynamics and managing different communication styles so all voices are heard.”

Hulse and McDermott believe there needs to be more collaboration between counselors and police officers across the country, and they recommend that counselors be proactive about offering their skillsets to local police departments.

“Counselors have been trained in interpersonal skills, feedback skills and skills for leadership tasks,” Hulse says, “and [they] can be great resources for teaching and strengthening these skills.”