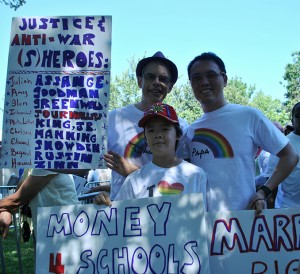 In August, the nation commemorated the 50th anniversary of the March on Washington, when Martin Luther King Jr. and hundreds of thousands of others gathered on the National Mall to demand jobs and freedom for everyone, regardless of race. The King Center and the Coalition for Jobs, Justice and Freedom coordinated another march on Aug. 28 to celebrate King’s immortal “I Have a Dream Speech” and to call renewed attention to the ideals of the original march.

The 50th anniversary march was also used to highlight current issues needing attention in today’s society. Stuart Chen-Hayes, a past president of the Illinois Counseling Association and Counselors for Social Justice, a division of the American Counseling Association, marched with his husband, Lance, and their son, Kalani, 10, to bring attention to issues such as LGBT rights, marriage equality, universal health care, nonviolence and education.

Chen-Hayes, an associate professor and program coordinator for the counselor education/school counseling program at Lehman College of the City University of New York, says he and his family regularly participate in rallies focused on social justice issues.

“This was a historic occasion where we wanted to celebrate prior civil rights successes and focus on civil and human rights issues that still need to be resolved,” he says. “[In addition], my husband was born in Taiwan on the day of the original march 50 years ago, so we figured that as a mixed-race, dual-national, multilingual, gay-fathered family, there could be no better birthday present than to attend the 50th anniversary [of the] March on Washington.”

Stuart and Lance Chen-Hayes, who have been together for 19 years and had a legalized marriage ceremony in New York two years ago, make it a point to include Kalani in their social justice efforts.

“We’ve raised him with a strong social consciousness, and he wouldn’t have missed [the march] for the world,” Stuart says. “We regularly speak in front of audiences about social justice issues as a family across the United States and abroad, so he’s quite used to it.”

He hopes that the August march leaves a lasting impression on Kalani.

“We [want] him to remember the mass of people and all of the … positive feedback we received from our signs and our shirts, and to feel what it’s like to speak truth to power in a country where so many human rights are still violated, and where war and secrecy are all too prevalent instead of peace and transparency,” Stuart says.

Chen-Hayes believes that certain issues, such as instances of overt racism, have improved since the first March on Washington. However, he says, systematic barriers still exist that make equality difficult for many Americans.

“There are too many young men of color headed toward prison,” he says. “Gun laws have been written … that are overwhelmingly used against young men of color. LGBT families still can’t get legal protections in 60 percent of the country because those states forbid gay marriage. The great recession decimated millions of families, and the poverty rate has increased with very little job creation in sight to restore those lost jobs. Outsourcing has decimated the middle class. Student debt is skyrocketing, as is college tuition. We spend way too much money on war… and bailing out banks instead of focusing on jobs and [erasing] debt for young people.”

Chen-Hayes also sees the need for the counseling profession to push for greater progress within its ranks. “We’ve seen great movement in multicultural and social justice issues in some ways,” he says, “but in others, we’re not anywhere near where we need to be.”

Chen-Hayes believes that lasting social change starts with grass-roots efforts, not at the ballot box.

“Real social change is made in the streets and organizing over the Internet,” he says. “You have to be an advocate, and that means getting out in the street and organizing online. There are so many groups that you can connect with to bring back participatory democracy. Right now, the United States is a corporate plutocracy, and we all need to fight to change that.”

Thelma Daley, a past president of ACA who took part in the 1963 March on Washington, had her reflections published in an essay in USA Today. Read that article here.